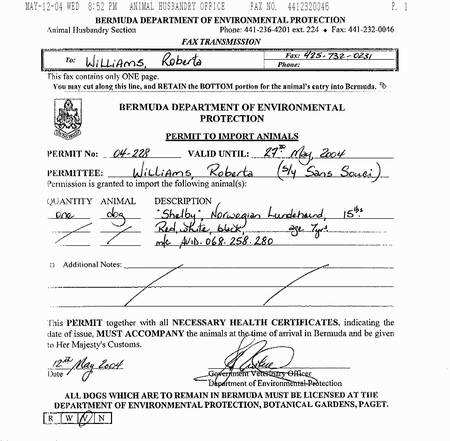 First off, we received some great news today. Shelby (our dog) has been approved to enter Bermuda!!!
I uploaded a copy of her permit to the website (under Misc. Images). That’s a huge load off our minds.

We have only two more days to go before we head to sea!!!! It’s starting to get scarier and scarier. It has been extremely windy every day here in Fort Lauderdale. When I look at the sea and see all the whitecaps and waves, it seems hard to imagine that we’ll soon be out there.

To give you a perspective on this speed, 8.5 knots is about 10 miles per hour. It’s not exactly a blazing speed. Some of you who are reading this already understand why we’ll be going so slowly, but my guess is that many don’t. For those who really don’t know much about boats, let me give you a quick super-high level overview. Basically, boats break into two categories: planing boats, and full-displacement boats. There are some hybrids, that are half way in between, but as a rough way of looking at it, this will suffice. The difference between the two has to do with how deep the bottom of the boat is beneath the surface of the water while cruising. Most powerboats have planing hulls, meaning that they plane above the water while moving. Most sailboats have a full-displacement hull, which means that they do not lift up while moving through the water, they push the water aside as they move through it. Most sailboats have hulls that run 6 to 10 feet below the water.

Whether or not a boat planes, or is full-displacement, makes a huge difference with respect to how much energy it takes to move it through the water. Planing boats require a huge amount of energy (lots of horsepower equates to lots of fuel) to lift them above the water and let them plane from point A to point B. Once above the water, they are not slowed down, and can run at fast speeds. On the other hand, there seems to be an exception to the law of physics, which is exploited by sailboats. An object in the water can be easily moved through the water (meaning without much energy expended), BUT ONLY up to a certain speed. The length of the boat makes a difference. The longer a boat is, the faster it can move through the water without consuming much energy. As crazy as it sounds, a boat 60 feet in length can be moved through the water with as little as 100 horsepower, up to about 5 knots of speed. To move it at a speed of 10 knots may require 10 times as much power. There is a math formula that can compute the speed that a given length boat can move through the water before it starts needing a HUGE amount of energy (fuel). If Sans Souci were half as long, and weighed half as much, its maximum speed would be MUCH LOWER, even with the same motor!

Lets put this into something closer to English. Have you ever tried to push a boat by hand? I can move my boat, and have done it many times, by pulling on a rope that leads to shore. I guarantee you that I do not exert even one horsepower. Having said that, there is no way I could pull the boat very fast. If I were to do an experiment, I would find that no matter what I do, I can’t move the boat above a certain speed. Sailboats consume almost no fuel, even when running with a motor. Most sailboats have a backup motor in addition to having sails, and this backup motor is typically only 20 to 50 horsepower, and burns perhaps 3 or 4 gallons of fuel per hour. A similarly sized planing boat might consume 20-30 gallons of fuel per hour, but would go MUCH faster.

This is where range becomes important. Range is the distance that a boat can go. Most personal planing boats (which is essentially all non-commercial powerboats) are limited to a range of less than 500 miles. There are fishing boats with huge tanks, and some semi-displacement (meaning half way in between) boats, that can go farther – but generally speaking, 95+% of most boats you see are limited to a range of less than 500 miles. The really big multi-million dollar powerboats that you see are able to cross oceans because they have REALLY big fuel tanks, not because they are defying the laws of physics. You can either go slow and not use much fuel, or go fast and REALLY burn it fast. It’s not a straight-line co-relation. A planing hull boat could easily burn 5 to 10 times the amount of fuel while going only 2 to 3 times faster.

Sans Souci is a trawler. So, what is a trawler? Trawlers are powerboats that are designed more like sail boats, with full-displacement hulls. They do not plane above the water, and they do not go fast. They have motors with limited horsepower, and use very little fuel. For instance, Sans Souci only burns about 6 gallons an hour, and could burn as little as 3 gallons per hour if we slow down. At 5 knots, Sans Souci’s range is over 5,000 miles! At 9 knots, this drops to around 2,000 miles. To accomplish this we are carrying only about 2,100 gallons of fuel.

Trawlers are recent inventions. Oceans have been crossed before, but only by sailboats, or huge commercial ships and mega yachts. The first trawler to complete an around-the-world trip, otherwise known as a circumnavigation, occurred within the last decade, and in just the last five years, trawlers have really started to catch on. My guess is that over the next decade we will start to see sailboat sales decline rapidly and sales of trawlers pick up – for people interested in retiring and seeing the world via a boat.

Anyway…. That’s why we’re going so slow… (and besides – once you are retired, why rush to get anywhere?)

P.S. – I received several enquiries from people asking what we do at night. The answer is, we keep on going. I’m wiped out after a long day. I’ll explain how our 24–hour “watch” system works sometime in the next few days. We’re tying it down now.