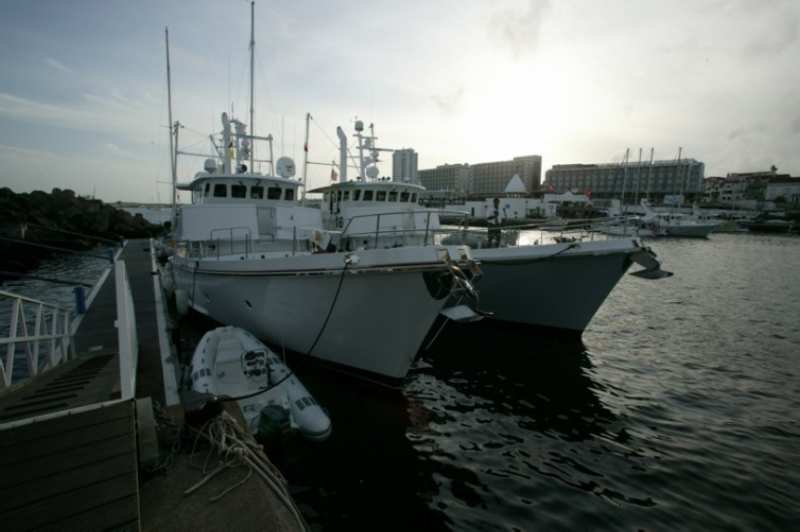 Division 1 arrived in Sao Miguel this morning at 8:30am. The 150 mile ride from Horta could not have been smoother, or calmer.

Last evening’s only excitement was provided by Chris and Sonaia from Goleen. Sonaia elected to make the crossing on Crosser, in order to sample life on another boat, in particular to take advantage of their masseuse. Throughout the evening Chris and Sonaia spoke often via VHF radio, including on one occasion, a prolonged romantic discussion that had everyone glued firmly to their radios. As their conversation was ending, Braun from Grey Pearl sternly warned them that all VHF communications were to consist only of rally business. Later, in the middle of the night, my father in law John broke the news to Rip that Ray Charles had passed away. In memorial, Sans Souci broadcast a selection of Ray Charles songs to the fleet.

Arrival in Sao Miguel is on track to take longer than the passage to get here. We weren’t allowed to enter the harbor until cleared by the marina office, which was supposed to open at 9:00am, but didn’t really open until nearly 10:00am. Then we discovered that they had no space for us. We were asked to anchor and send in tenders with the ships papers.

For some reason, when we left Horta, we had to check out with immigration, and then had to check back in today here in Sao Miguel. The Azores are part of Portugal, which is part of the E.U., so once we are into the E.U., it seems to me that we should be in the E.U. and no further paperwork necessary. Not true. Here in Sao Miguel it was as though we were entering the country for the first time. I had to stand in line at four different offices, and clearing customs consumed about three hours. Back when Nordhavn was helping us, it took only about 10 minutes.

While I was ashore working with customs, Rip and team were back on Sans Souci trying to find an anchorage. Sans Souci was the last boat into the outer harbor of the Marina, and our other four boats took the last available spots. After searching for an hour for a safe anchorage, they decided to come into the marina anyhow, and pulled along side the fuel dock. This gutsy move freaked out the local authorities who promptly called the cops. Thank goodness for Sonaia, from Goleen, who speaks Portuguese. She convinced the police that Sans Souci had hydraulic problems, and could not anchor. She then asked everyone on our boat to look busy, so that our cover story would work. The police left after we promised to make our repairs and get out to anchor as quickly as possible. After enough moorage was found in the marina that two of our boats could come in, we grabbed one of their anchorage spots. As I write this, Grey Pearl, Crosser and us are at anchor. The marina has said that they will not ever have space for Crosser, but that Grey Pearl and Sans Souci may be admitted tomorrow (to raft together against the sea wall).

Sans Souci and Grey Pearl, rafted together in Sao Miguel
Everyone on my boat complained about the situation, except me. I love being at anchor, and could stay here for days. We can swim, hang out, or tender in as we please. Roberta, her parents and myself just spent a couple of hours on the back deck drinking some wine and talking. The Grey Pearl team floated in their tender behind the boat for a while to chat. Crosser brought us cookies (peanut butter!). Roberta and I had to watch her parents eat them while we starved. Soon we will tender into town for dinner, and it will be fun to explore.

Overall … Life is good. We may be in the marina tomorrow, or we may not. I don’t care. The sunset is gorgeous, and we have three days to explore a new island.

I may not do an update tomorrow or the next day – depending on if anything interesting happens or not. The Division 2 fleet does not leave Horta until Saturday, and I do not know if I will receive regular updates from them. On Monday we will start on 1,000 miles of what could be our roughest ride yet. But, that feels a lifetime away.