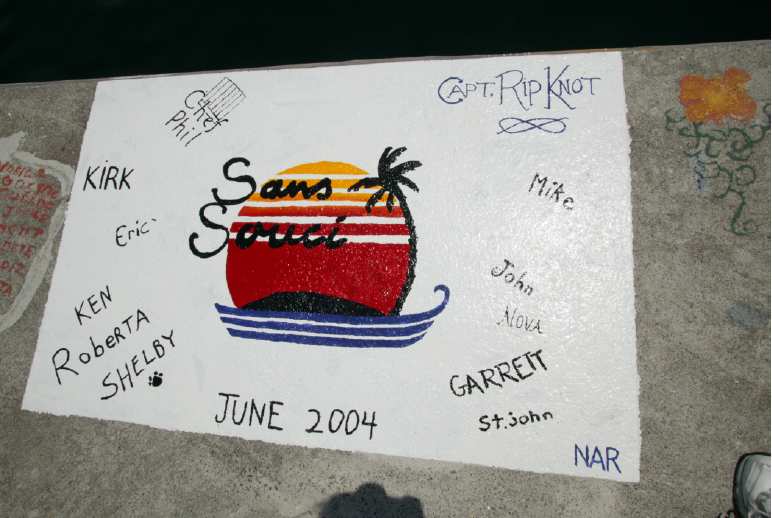 Division 1 of the NAR fleet, with the exception of Emeritus, left Horta at 4:00pm GMT, headed for St. Miguel, another island in the Azores. As I write this, it is 8:00pm, and we show 121 miles to our destination. We’re running at 9 knots, and anticipating arrival around 10:00am tomorrow morning.

Thus far, all is smooth, but our departure on Monday for Gibraltar looks dicey. Here’s the weather forecast I just received:

“…There is some indication that Monday/21-Tuesday/22 will bring some 25 kt SW-W winds and waves above 10ft to the Azores waters and eastward to 20W-15W. These conditions could impact directly on the scheduled vessels’ departure Monday/21st for Gibraltar…”

I’m not sure what this means for our Monday departure. The Division 2 group is scheduled to leave on Saturday, and pass by San Miguel sometime on Sunday. By Monday when we depart, they should be 150 miles or so in front of us. The goal is for us to get on exactly the same track, and close the distance a little each day, catching up to them just as we arrive together in Gibraltar. Hopefully the outlook will improve. We have always known this third leg had the potential to be the roughest, but hoped for a positive surprise. Given that the last leg, which we thought would be the smoothest, became a very rough passage, it seems like we are owed good weather. Fair is fair.

Our departure today was not without incident. Just hours before departure, one of our boats chose to continue without one of their crewmembers. I do not know what was behind the surprise crew change, but it was quite an event, as a very large pile of bags suddenly appeared on the dock, and the person involved started going from boat to boat seeking a ride. I do not know what ultimately happened, or what will happen with him. Sans Souci also had a crew change during the final hour in Horta. One of the Division 2 boats had a gentleman with a kidney stone problem during the Bermuda to Azores leg. After a few days of pain, the gentleman involved, one of the boat owners, believed himself cured. A visit to an Azorean hospital indicated otherwise. He underwent (I believe it is past tense) a minor medical procedure, and will need to miss this next leg. As this left the boat in question with only three crewmembers, we agreed to transfer Eric Leishman from Sans Souci to the other boat. We now have eight persons on board.

I am happy to report that our departure was without incident. I did take pictures of our logo, which we painted on the dock, and will post that picture later tonight or tomorrow. Earlier this morning, Phil accidentally spilled a can of black paint on it.

He had a scary hour as he hurriedly repaired the damage. As you will see from the photo, no permanent damage was done. I drove the boat away from the marina, zigzagging through a minefield of sailboats that were anchored within the approach to the marina. The wind was light, so I wasn’t really tested. Yesterday, I watched a 130 foot powerboat, without a stern thruster, side step into a 135 foot opening, with multiple sailboats rafted together in front and in back, of the space he was assigned. In nonboater talk, I’ll compare it to parking a car. It’s as if he had to parallel park a car, in a space that was only marginally longer than he was. A car simply could not do it. We had 20 knots of wind at the time, directly on his nose. Dozens of us stood on the dock for the entire 20 minutes it took him, admiring his valiant efforts. I’ve had situations approaching strange marinas where I’ve been asked to accomplish similar feats. I know what I can and cannot do, and for now, choose to anchor out in these situations.

Many of you have written to me in the last couple of days asking that I send them a manual for arriving crew that was put together by Scott Strickland of Strickly for Fun. I have asked Scott for it a few times, and do expect that I will get it – but, I’ll have to keep bugging him. I had a printed copy in my hands yesterday, and wished I could have had a copy prior to this trip. I tried to get a copy immediately, but Scott wanted to “depersonalize it” prior to giving it to me. As soon as I get it, I’ll post it immediately on the web site and alert everyone to its existence in my daily update. Scott and I are different people, and that came through in my reaction to his “rules and regulations.” He laid down very strict guidelines for crew. There was even a rule requiring that play with a Game-Boy was to be done outside, on the rear deck. Aboard Sans Souci, we were much more laid back, perhaps too much so. The document will be valuable for all boaters who download it, and customize it to reflect their individual preferences. It will force us to think through what we consider to be appropriate crew conduct, and ensure that our wishes are clearly communicated.

Yesterday, I wrote a paragraph for my daily update, which I deleted moments after I wrote it. I was thinking about how many miles the group had traversed: 18 boats, each having already crossed 3,000 miles of ocean. That’s 54,000 miles collectively. I then added the following sentences to my paragraph: “And, prior to the rally, many of these boats converged on Florida from as far away as Alaska, crossing at least another 50,000 miles collectively. All of this without major mechanical difficulty or injury.” My point was that although I have spoken at length about mechanical problems on the various boats, I wanted to make sure that my comments were read in the context that we are talking about a LOT of boats, and a LOT of miles. Although there have been mechanical failures, these boats have redundant systems. None of the boats would have been “in need of coast guard rescue,” with the possible exception of Uno Mas, which lost its stabilizers in high seas. Having said that, I’m reasonably confident they would have been fine, but the point could be argued.