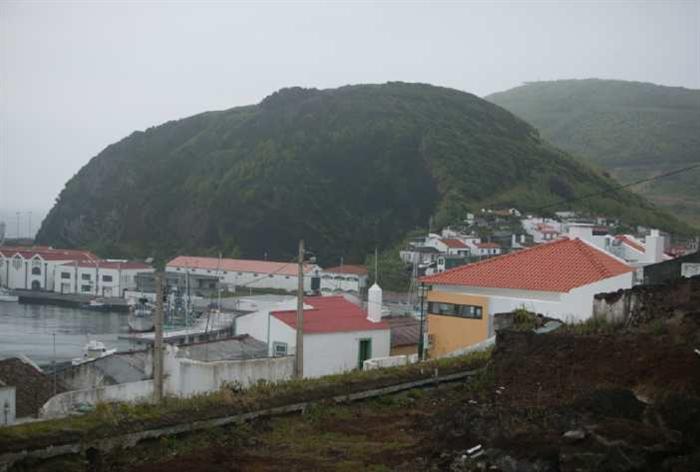 I spent most of today trying to solve the problem that caused many of you to receive dozens of emails that were not supposed to have been sent. This would have been easy to fix if I had a decent internet connection, but from here in Horta, with only a poor and expensive dial-up connection, it hasn’t been so easy. If you receive this email, then hopefully that is good news. If you receive it more than once, then please rest assured that I am working on the problem.

Now back to the rally….

I do not have much new to report. Yesterday Roberta, her parents and I spent the day sightseeing. We drove completely around the island, to the top of the island and just about every road on the island. I really don’t want to sidetrack this mailing list into becoming a travel log, so I won’t bore you with the details. Suffice it to say that this is a very beautiful place, and we had a great time.

Faial has some beautiful scenery

Yesterday afternoon was spent wandering the docks. My primary goal was to talk several other people out of CDs full of pictures. I now have hundreds and hundreds of new pictures to upload. The website has been light on pictures from Division 2, and I can now resolve this inequity. I was a little frustrated though, in that I wanted pictures of the heroic efforts made to get Autumn Wind and Uno Mas rolling again, and struck out. I have a lead on the pictures I’m seeking and will upload them as soon as I can get them. My current challenge is that it would take a lifetime to upload all the pictures I have on a dial-up internet connection. There is an internet café here that allegedly has reasonable speed, but is closed today. For this reason, I may wait to upload new pictures until tomorrow.

One interesting rumor I heard on the docks – several boats are considering the possibility of leaving early. According to the schedule, we are to be here in Horta for another week. Plenty of time was left in the schedule so that we would have a buffer to provide for repairs or weather delays. It is now apparent that most of us do not need this time, and many of us are itching to go.

The Azores islands are very spread out. It is nearly 400 miles from one end to the other! The major island in the group is St. Miguel, and we are on the island called Faial (the city is Horta). I’ve been interested in going to St. Miguel because it has the largest population, golf courses, restaurants, etc. Horta is a bit more of a small town. I went to the airport yesterday to ask about flights to St. Miguel, and even asked one flight attendant if it was worthwhile to go. Her response, “If you haven’t been to St. Miguel, you haven’t been to the Azores.”

It was a coincidence that I had been thinking about flying to St. Miguel, because that is exactly where the others boaters who wanted to get moving were thinking to go. We would go to St. Miguel and anchor out for a few days. I immediately agreed. The good luck is that St. Miguel is 200 miles in the same direction as Gibraltar – East. Instead of leaving a week from now, we could be rolling within a couple of days! As much as I wanted to be on land, I’m impatient to get back on the water. I am also looking forward to being at anchor, with a big city only a tender ride away. I should know later tonight whether or not this is just talk, or something we are going to do.

I was blindsided by one piece of bad news. We are losing Garret and St. John from Sans Souci. As I hinted in a prior update, several boats have had crew issues. Aboard Sans Souci, we’ve been fortunate to have a crew that has gotten along well. This is not true of all boats. On some boats, the tensions have reached the point that change is necessary. I have made no effort to find out what boats have had problems, or what the problems were. The rally organizers decided that the easiest way to resolve the issue was to mix up the crews where possible. I do not know what process was used to decide who was moving, but learned through the grapevine yesterday that two of our crew are being replaced. We shall miss them.

The positive side of this is that we are gaining two new crewmembers, both of whom I’ve met and both of whom seem like they will be great crew members. They are Eric Leishman, and Michael Ronquillo. Other than that Eric is Jim Leishman’s son (a Nordhavn hauncho) and Michael is an EMT, and that they both seem nice, I know nothing about them. I’ll relay more as I learn it.

I have a little more information on how the Division 2 boats fared on this last leg. Roberta spoke with the crew from Stargazer. They were happy to report that they had NO problems. She asked about their stabilizers, and they explained to her that they use paravanes rather than stabilizers, and that they worked perfectly. My guess is that at least half the people on this list are scratching their heads as to what paravanes are. I don’t have time to explain them today (because of a rally event that starts in a few minutes) but I’ll do my best to describe them tomorrow. I was on another boat briefly (either Egret or Envoy – I confuse them) and noticed that they were replacing the hydraulic pump for their stabilizers. I asked how they were able to get a new pump and they said that a Naiad representative hand carried it here. I didn’t make it by Uno Mas, but I’m very curious to find if they will be able to get a new inverter in time to make the next leg. They can run the leg fine without the inverter, but would need to run their generator non-stop. This would have an adverse effect on their fuel consumption, and could be a major problem. When last I spoke with them they weren’t sure what would happen.

Post Views: 318
PrevPrevious PostDay 34 – the rest of the story
Next PostDay 36 – Still in HortaNext