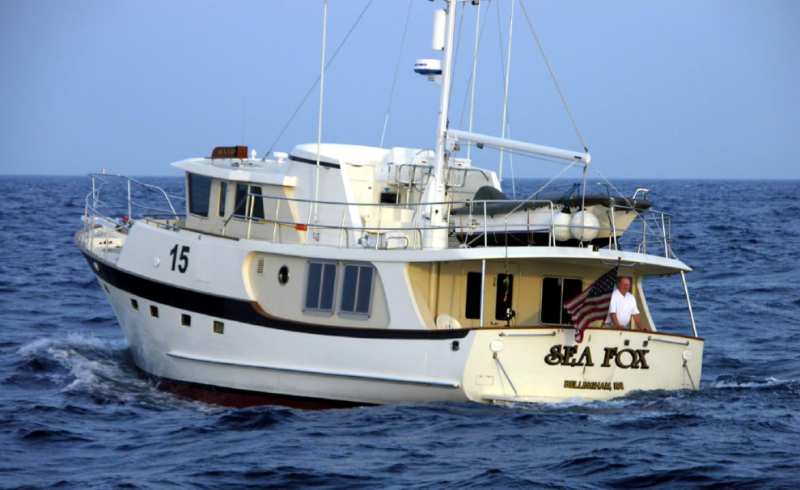 The Division 1 (faster boats) are now officially in front of the Division 2 boats. They are taking a more southerly route than we are, and we never came within 40 miles of each other. At the current speed, we will be arriving in Horta at 6:30pm on Thursday, and they will arrive on Friday morning at around 7:00am.

“…SUPPORTING GUIDANCE STILL SUGGESTS THAT SEA CONDITIONS WILL DETERIORATE DURING THE COMING 3-4 DAYS. WE SUGGEST PREPARING FOR POSSIBLE WAVES OF 9-12FT, COMBINED SEA/SWELL AS EARLY AS TUE/08TH-NIGHT FOR THE FAST GROUP, AND FOR BOTH GROUPS WED/09TH THROUGH THU/10TH….”

This morning’s roll call was dominated by weather discussions. We are receiving conflicting weather reports from multiple analysts, plus we have several people who are doing their own interpretation of the weather charts. The prognosis for the next two days ranges from relative calm to 10-foot seas. I’m cheering for those who predict calm seas! Unfortunately, everyone is in agreement that our arrival on Thursday will be rough. Let me rephrase that, and say “bumpy”. These are sturdy boats. There is nothing in the forecast that represents a real safety challenge. It will just be bumpier than I would like it for our arrival in a strange marina.

To some extent it is irrelevant what the weather report says. We’re 500 miles from the nearest land. Whatever it will be, it will be, and there isn’t a darn thing we can do about it. Ordinarily I’d be studying the charts for places to hide from bad weather. There is no such concept on this passage. Our plans are not likely to change, whether the winds are at 10 knots or 40 knots.

My fuel concerns are evaporating. We have a thousand gallons of fuel on board, and only 461 miles to go. Thus far we’ve been averaging around .93 miles per gallon, giving us a range of 930 miles. In other words we can easily make it to Horta.

Life aboard ship has become quite boring. We’re all just putting in time. Trivia games and reading help pass the time, however, the trip seems longer and longer. In one conversation today, we started referring to sleep as a time machine. We know that if we go to sleep, the distance will drop dramatically before we wake. It’s like being able to leap forward in time. I reminded people that Steve Jobs wrote a book called “The Journey is the Reward”. We need to stop thinking about land, and enjoy what we are doing. That didn’t make anyone feel better, including me. We want land, and sooner is better. In another indication of everyone’s mood, this morning Roberta noticed we had dolphins on our bow again, and no one expended the effort to look at them.

Roberta and I are starting to disagree over what comes next. After over a month on the boat, I know that I will be in the mood to stay on land for a while. Roberta says that our “boating experience” won’t really begin until we finish the rally, slim the crew down to just her parents and us, and start wandering the Spanish coast. We are under no time pressure to return to the U.S., beyond some commitments at the beginning of August that could be moved.

We DO need to get the boat back to France before we leave for the U.S., so that it is positioned for its eventual trip across the Atlantic this winter. I’ve made arrangements for a boat slip near Monaco (on the French Italian border). My math shows this trip at roughly a thousand miles from Gibraltar. I would like to do a relaxed couple of weeks cruising after we arrive in the Med, but I don’t know that I want to span any great distances. I’d like to move at a mellower pace and use our time to see new places and meet new people.

This brings up lots of issues about where we cruise and how we get the boat to its slip in France. In some ways, it is too early to make this decision. It is the wrong time to be making decisions about future passages. The urge for land is biasing my judgment. The outcome from this morning’s discussion with Roberta seems to be that we’ll cruise for two or three weeks after Gibraltar, and then have a delivery crew move the boat to its temporary slip in France.

Reality is setting in as I think about what is in front of us. Whereas it feels like we’re on the downhill slide, we still have 450 miles to Horta, followed by 1,200 miles to Gibraltar, and then the 1,000 plus mile run to Monaco. All of this is being done at roughly the speed of an ordinary jogger. I am not complaining. We have been extremely lucky on Sans Souci. No major mechanical problems. No crew conflict. Awesome people and awesome food. 10 minutes after we reach shore I will remember how great this trip was.

Before I forget, I should comment on last night’s dinner, which was exceptional as usual. Phil made a chicken stir-fry that was a huge hit. How he was able to chop vegetables while hanging onto rails with one hand, and a still-bandaged finger on the other, I don’t know. On another Phil-related topic, he dropped a bottle last night with a message in it. It will be fun to see if he ever gets a response.

After last nights weather discussion, Crosser announced that they would prefer to get into port as soon as possible, to avoid the coming bad weather. They upped their speed to 11 knots and are now 15 miles ahead of the group. We too have accelerated a bit, and are now showing speeds between 8.5 and 9.5 knots. My plan is to stay at this speed unless we get a nasty surprise on fuel consumption, which I’m not expecting.

I am constantly amazed at how many people are reading my daily updates. When I posted the pictures of the swim party on Crosser, I received a radio call from Crosser within minutes reporting that they were getting calls from home saying they had seen the pictures. In another example, I commented yesterday that I had passed on a stabilizer upgrade prior to this trip, and am now wishing I hadn’t. That also has resulted in a series of emails and calls from other rally boats, all trying to help. I’ve now spoken with both Que Linda and Grey Pearl who say they are running straight, whereas Sans Souci is lurching from left to right as we go. I’m now convinced – a stabilizer upgrade is very likely to be part of our future.

As a crew member aboard the Krogen 58’ Sea Fox during the first leg of the NAR and being in communication with owner/captain Dennis Fox during Leg 2, I offer the following insight into some of the information having been reported on this site:

First, I’d like to clarify some of the comments regarding the inability of Sea Fox to keep up with the bigger boats during the first leg of the rally resulting in a decision to run with the smaller boats in leg 2. Dennis, as a competent and conservative captain, usually runs Sea Fox in a “dogged down” environment at sea whereby all hatches, ports, and doors are closed for safety, with the generator and air conditioning providing a comfortable climate controlled environment for the crew. A comfortable crew is a rested crew should things go wrong at sea. With the larger boats running faster than the previously agreed upon speed during leg 1, Dennis elected to reduce speed for a 12 hour period as the fleet neared Bermuda. He did this in order to obtain current data for fuel/range calculations in the fully climate controlled environment so as to be able to plan appropriately for the 1800 mile second leg. At the conclusion of the 12-hour test, and with pleasing results, Dennis increased speed arriving into Bermuda between the two fleets.

Dennis’ decision to run with the smaller boats for the second leg is yet another example of his prudent seamanship. Approximately one-third of the way across on leg 2, he reported a remaining range of over 2500 miles in his climate controlled environment (generator running, A/C on and hot showers). I’m sure Dennis and crew are comforted by having more than ample reserves in case heavy head seas were encountered during the trip.

With the exception of a nagging problem with the stabilizers, Sea Fox continues to run like a Swiss watch. Now on his fourth Krogen, Dennis has run Krogen designed hulls thousands of miles and captain and crew continue to be safe and comfortable aboard the form stabilized hull even without the additional motion dampening provided by active fin stabilizers. Dennis has previously run 650 miles from Puerto Rico to the Bahamas in 10 foot seas without them and had a great ride.

On another note, I’d like to take this opportunity to thank all those at PAE for the coordination of this event and making the Krogen team feel so welcome. I met many wonderful people in both Fort Lauderdale and Bermuda and wish a continued safe journey to all.

And regarding the “Mailbox in the middle of the Atlantic…”

We always pulled that one on the new guys when I was in the Navy. We called it the sea buoy and would have guys staring off the bow for hours looking for it.

As we approached the International Date Line, we’d set up one of the variable cursors on the radar scope to a north-south orientation well off the west of us and announce on the intercom that this strange electronic phenomenon associated with it was now on radar. Somebody would surreptitiously advance the cursor to close us, and before the distance was at our visible horizon, we’d tell the suckers to go forward on the bow to watch for it.

Another trick was the sea bat. We’d announce the capture of one on the fantail about the time “sweepers” was called – thus people standing around with brooms were not suspect. As the unwitting were lead to an overturned box with a small viewing hole in it, they had to get down on hands and knees to see. And then the “sweeper” pounced smacking them in the butt with their brooms.