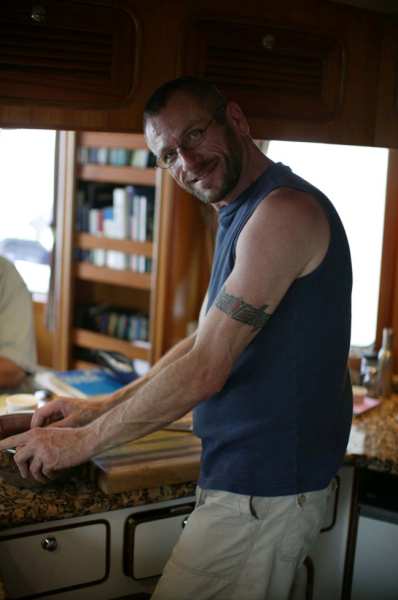 Today was another day of preparing for the trip. Phil, the boat’s chef, spent the day shopping for the voyage. We did some quick math, and for the roughly 70 days that the voyage will last, there will be approximately 210 meals – not counting snacks. We’ll have eight people aboard most of the time, so this translates into over 1,600 meals! Even planning for drinks is a huge undertaking. Who is going to carry 2,000 cans of coke onto the boat, and where will we put them? Thus far Phil seems pretty mellow and confident about the whole undertaking – so I guess that if he isn’t worried, I won’t be worried.

There are other complex issues we have to deal with. For instance, Bermuda has notified us that they will inspect all food on the boat. All vegetables and fruit that we arrive with in Bermuda must be destroyed. This isn’t a huge deal as any vegetables we bring on in Florida are likely to be mush by the time we get to Bermuda anyhow. Overall, this is not an area I am spending alot of time thinking about. The rumor is that food is irrelevant on a long passage. No one eats, and those that do can only enjoy it for a brief period before the food becomes colorful decoration for the side of the boat.

Most of the people aboard ship have a connection with Seattle one way or the other, so coffee was on the agenda today. Roberta gave lessons on “how to run the espresso machine”. She also shared with the group the location of the nearest Starbucks. Roberta was a big hit.

Speaking of Roberta, I should comment a bit on the demographics of those that are here. I believe, but I am not yet sure, that most of the boats are owned by couples. Having said that, you wouldn’t know it attending the seminars. During the classes I’ve been to, I’d say that 90% of the attendees are male. About 2/3rds of these appear to be between 50 and 70, with the other third under about 25. I know that its not politically correct to notice or comment on these things, but I’ve never been a big believer in political correctness – so, with that in mind: My guess is that most of the owners fall into the older age group, and the younger people were generally crew or in many cases employees of PAE, the “hosts” of the rally. There are exceptions to this, but as a generalization I don’t believe I’m far off the mark. Generally speaking, the types of people who are crossing oceans seem to be retired couples. Another attribute that seems to bond the group is tougher to define. These are not average retirees. The grey hair is the least important part of the story when it comes to describing this group. These are people who are self sufficient, multi-talented, courageous, self confident, adventurous, smart, and just about every other adjective you can imagine, except stuffy. I have trouble imagining anyone in this group driving a BMW on their way to some yuppie event. I began this paragraph talking about Roberta, because there are clearly more men here than women. Even on our boat, we have eight men, plus Roberta (Marcia, Dan’s wife bailed on us). I’m not sure I understand that one yet. At dinner tonight the owner of the restaurant said that he wanted to buy a 90-foot trawler, but was having trouble convincing his wife. I always have thought of boating as something couples do together, but obviously it’s some kind of a macho thing (and, no one told Roberta or I)

Our boat, Sans Souci, is one of three boats that are leading the expedition. This seems to be in spite of the boats French name, which seems to be causing some confusion. I’m not saying this for any kind of political reason, but it has become apparent that NO ONE can pronounce these particular French words. In virtually every speech, Sans Souci is referred to for one reason or another. For the record, here’s where the name came from, and how it is pronounced: The words Sans Souci literally translate as “no worries”. I chose a French name simply because I love France and wanted to spend time cruising the Med aboard her (which we have done). For us, the name Sans Souci is reminiscent of France, and also captures the spirit of the old Bobby McFerrin song “Don’t worry – be happy!” The boat represented a chance for Roberta and I to take a few years off after a 20+ year career and enjoy traveling around the world. No worries. By the end of today, I was convinced that I am the one who doesn’t speak French. I have heard Sans Souci pronounced (just today) as “San Sushi”, “San Suzy”, “Sahn Sushi”, “San Suki” and more! Here’s how I believe it should be pronounced: sahnseuss-ie (the seuss is like Dr. Seuss)

I attended only one class today, and then spent the rest of the day aboard the boat problem solving. The class was very interesting. The theme was “what is most likely to go wrong, and how do you fix it”. Even though there will be other boats around us, we need to be prepared to be self-sufficient. Things tend not to break when the sun is shining and the water is flat. Nope. Instead, things go wrong when the waves are 20 feet tall, lightning is striking in all directions, and the radar is a useless green flicker of white, due to the lightning and squalls. When things get bumpy we will be running AT LEAST a mile apart. There will be no way to transfer a mechanic from one boat to another.

So, what do you think was the #1 problem? The group consensus was that the majority of problems at sea had been fuel related in one way or another. Sans Souci carries enough fuel to go thousands of miles (from 1,500 to 5,000 depending on speed), but this fuel is spread across six different tanks. I’m not sure exactly why it’s not one big tank, but my hypothesis is that if you have 2,500 gallons of gas in one big tank, and the boat starts rocking side to side, you could have a lot of momentum from all the sloshing. Also, if you take on some bad fuel, it’s nice to think that you still have other tanks you can run on. Anyway, there is a simple, but reasonably complex system of switches that specify which tank to pull fuel from, and which tank to return fuel to (on diesel engines, not all fuel gets burned on the first try).

It can happen to even the most seasoned veterans that when the boat is rolling around and you are worn out from days of around the clock cruising that the switches get set wrong, and the engine runs out of fuel, even though there is plenty in other tanks. We went through the process to bleed fuel lines, with the understanding that we never want to actually do this at sea, with a hot engine, in ocean conditions. Roberta and I did actually run out of fuel once in the Mediterranean about 50 miles off of Toulon France, in really bad weather. It’s a long story I’ll save for another day…

The balance of the day was spent crawling (literally) through the engine room of Sans Souci. Today was “inspection day”, which meant a team of inspectors was aboard checking out all our emergency equipment. We had checklists prior to their arrival, and had ensured that everything was in its place – so we passed on the first try (with a couple of small things to fix up). In addition to the inspectors I spent the day debugging the internet connection on the boat (which isn’t looking promising) and then spent another couple of hours meeting with mechanics to go through all the renovations that has gone on with the boat over the last six months. By the end of the day I was starting to feel very good about things.

Hopefully tomorrow will be easier…