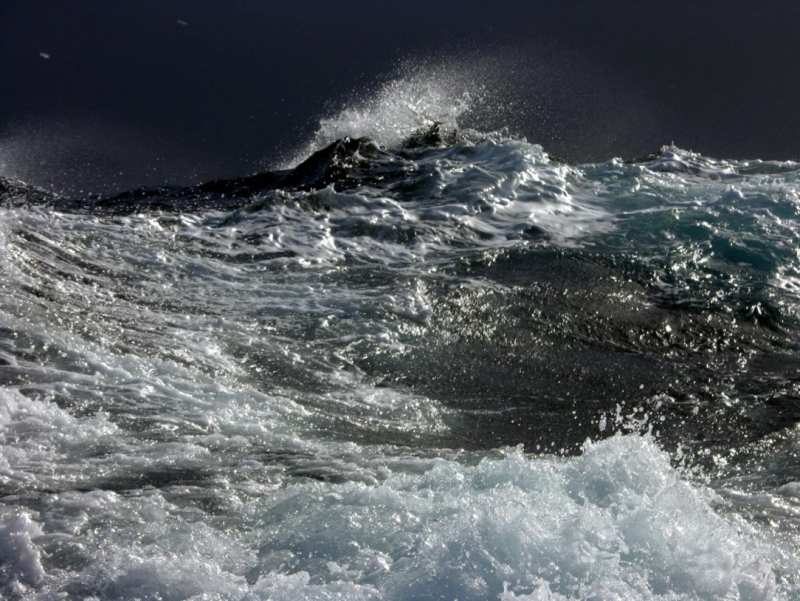 Roberta summarized our current weather on the morning roll call with the other boats by saying: “When I first looked out the window this morning, I was positive that we were back in Seattle”. We have been working our way Northeast, and are now near the same latitude as North Carolina. Today is grey and dinghy.

Morale seems to shift with the weather. When we have blue skies and flat water, no one looks to see how much further we have to go. Whereas today, with the boat being slapped from side to side by the waves (a steady 15 knot wind on our port beam), everyone is focused on getting off the boat as quickly as possible. Everyone is smiling on the outside, but you can hear in their voices that tempers could flare on a moments notice, should anything not be as they planned.

The weather conditions around us are not all that bad. We shouldn’t be getting pushed around as much as we are. We have a few different theories as to what is going on.

– The boat is light, and we’re bobbing like a cork. This is Rips theory. We have burnt off about 1,100 gallons of fuel. My recollection is that diesel weighs around 8 pounds per gallon. This means we have lightened our load by over four tons, not counting our food supply, which seems to be vanishing at the same rate as the fuel. I am not putting a lot of stock in this theory. Sans Souci weighs somewhere around 60 tons, and a difference of 4 tons shouldn’t make a huge difference in the ride.

– My personal theory is that we’re bobbing the correct amount, given the fact that it’s a beam sea, with high waves (around eight feet). Since the waves are coming from our port side, we are just riding wave after wave to the top, only to surf down the other side. We have stabilizers that are supposed to handle this, as indeed they are. I am confident that if I were to turn off the stabilizers, Sans Souci would have seven sick crewmembers leaning over the rail within minutes.

Prior to the trip, I was contacted by Naiad to solicit my interest in upgrading my stabilizers. The technology has changed radically over the past six years, and they were willing to sell me the “latest and greatest” technology at a heavy discount. They wanted a chance to showcase their newest technology. I considered making the upgrade, but even a deep discount is not free, and this is an area where I didn’t think the investment made sense.

Stabilizer can be seen just below the surface

Roberta and I are not normally the type of people to do long passages. We see this voyage as something that every serious boater should do at least once, but not something I’d like to repeat if I can find a way around it. I responded to Naiad’s proposal as honestly as I could. I consider myself more an “anchorer” than a “boater”. I’m in boating for the days when the water is flat and the days are warm. My favorite trip involves anchoring off a desolate island, spending the day (or days) swimming from the back deck, followed by a barbecue on the back of the boat, and a nice bottle of wine. When weather comes, we either head to the nearest marina, or find a calm bay to hide out in. My focus is on picking days to go to sea that don’t require stabilizers. The stabilizer system on Sans Souci may not be the “latest and greatest” but it performs well, and meets or exceeds my expectations. Having said that, if the stabilizer salesman were standing before me as I type this, I’d happily buy anything that would stop us from being slammed around right now! It would be nice to stand up again someday without having to hold on to everything in sight.

You may have noticed that in the above paragraph I said that I like to be surrounded by warm water, which is inconsistent with us bringing the boat back to Seattle in January 2005. Sans Souci is going to Alaska next year. This apparent incongruity is explained very simply: Sometimes Roberta gets to pick where we go. Sometimes I get to. Next year it will be her turn.

Returning to our current trip:

– The Division Two boats are only slightly ahead of us now. By this evening, both groups will be exactly the same distance from Horta. However, we will not see each other, darn it. We are following the “rhumb line” approach to Horta, whereas the Division 2 boats are on a more southerly track. I checked this morning, and compared their mileage to Horta with ours. Each of us has roughly 650 miles to go, whereas our distance to each other is roughly 110 miles. Not only will we pass by them without ever being in radio range, but we’ll tie up in Horta nearly 24 hours before them.

– Neither group has any major mechanical or medical problems.

– Sans Souci’s water maker has died (at least until we get it repaired). Luckily we have a backup. We have a 500 gallon water tank, which would last us for several days were it not for the washing machine. Everyday seems to be laundry day here aboard ship.

– Boredom and trip fatigue is finally settling in. Kirk has been trying to pump energy back into the group by thinking of things to keep us busy. Trivia games that span all the Division 1 boats have become common. Kirk caught me reading the news online and talked me into reading the headlines to the entire NAR fleet. I announced that I would research any story that caught their interest and get back to them with added info. To make sure everyone was happy, I sought headlines from both the conservative and liberal press, the financial press, the entertainment press and even the sports press. At the end of my 20 minute “speech”, I asked if anyone wanted more info on any particular story. The only response: Who is J-Lo marrying? And, was her wedding dress white?