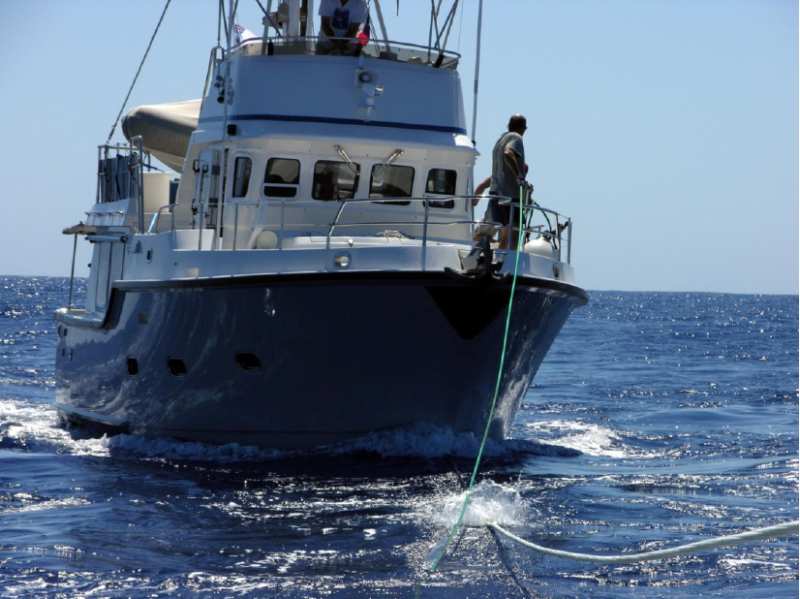 We said we would swim in the middle of the ocean, and today we did it. We looked at the map and guessed at the halfway point between Ft. Lauderdale and Gibraltar, and decided it was time for a swim. We did have a few of the boats together yesterday for a brief swim, but today’s swim was a much bigger event, with everyone included.

There were some tricky logistical issues. The sea and the wind were refusing to cooperate, as we attempted to get all six boats close enough to make it a party. Dropping anchors was not an option, although Hal on Que Linda did point out that we were sitting on top of a HUGE undersea mountain, and that whereas yesterday we were in 16,000 feet of water, today it’s a measly 2,200 feet deep. That’s better, but still a little more than I have anchor chain for. We stopped all six boats within about a 100 yard radius and jumped in. Sans Souci contributed the music with the Beach Boys at maximum volume. Crosser provided the primary swim platform. Que Linda had the hot tub going. I’m happy to report that all went perfectly and we have no injuries to report.

Last night on Roberta’s and my 8:00pm to midnight shift, we observed a huge blip on the radar about 8 miles behind us. By tracking it on the radar, we decided that it was going to pass right through the center of our fleet. We were moving at 8 knots, and the cargo vessel at 15 knots. I called them on VHS to ask whether or not they saw our fleet, and they reported that they did. They also reported that they were a bulk transport vessel (which I assume means container ship), and that they were en route to Turkey.

Then the part of the conversation I found memorable occurred.

I was imagining the confusion on the deck of the freighter. They had probably made MANY crossings, but never run into a pack of small powerboats traveling together this far from shore before. No one ever has. They must have thought they had discovered some invading force sneaking its way across the Atlantic. Que Linda has a cannon, loaded with blanks that they fire from time to time. I’m very happy they did not fire it at that particular moment…

Crosser called them, to pump them for a bit more information, and after a brief interrogation said: “OK. We will permit you to pass us” This also struck me as funny. The freighter was huge, and we were granting it permission to pass us.

The freighter had its own interpretation of the words “we will pass you on the port side.” Our entire fleet was tracking them closely on the radar, waiting for them to turn to port. The port-most (most northern) of our ships was Crosser. We were immediately to their starboard side, about 1 mile off. The balance of our fleet was to our starboard side, or in front of us. The freighter did not turn as they said they would. As it came closer, Crosser called the freighter to ask if they wanted Crosser to move aside to starboard. The word came back from the freighter that our fleet should change nothing. The freighter had everything under control.

And, they did. After a few more minutes their intentions came clear. They were going to pass between us and Crosser! We were separated by a mile, so there was plenty of room, but it was still very strange looking out on the port side seeing a city-sized ship fill our view, and to see Crosser disappear completely on the radar.

We had a bit of an issue at the 8:00pm roll call yesterday. Sans Souci received the slip assignments in Horta from our advance person there, Milt Baker. Each of us had a slip, with one exception – Goleen. They have 17 slips to be shared amongst our 18 boats. Their suggestion for Goleen was to raft alongside of Atlantic Escort. The only explanation offered was that they ran out of slips, and that the simplest would be to raft together two Nordhavn 57s. Chris (owner of Goleen) took the news well, but then as he thought about it, got a little more upset by the minute, with good cause. Horta has known for a year that we are coming, and we are arriving with fewer boats than we had planned. Fortunately Sonaia on Goleen speaks Portuguese, and can argue with the marina much better than any of the rest of us could have. Chris assured us that he would not be rafting, and I believe him. I would not want to be the person in charge at the marina in Horta, as I am confident that Chris will be informing them loudly of his discontent.

I understand how he feels. It would be difficult for a variety of reasons. You can’t get off your boat without passing through another boat. Your power cables don’t reach the dock, or if they do, there is no place to plug them in, as Atlantic Escort would already have their power cord plugged in. After 10 days at sea, we are all going to want things to be “right” when we finally reach land. I hope he is able to get somewhere with the marina.

Fuel burn here on Sans Souci continues to be an issue. We are running about .85 miles per gallon. This morning at 8:00am we had 1635 gallons of fuel remaining with 1070 miles to go. Our range on the fuel we have remaining is around 1400 miles. This mileage is worse than what we ran on the first leg. Perhaps the prop picked up some crud while we were in Bermuda. Goleen offered to send down a diver to look at our prop, but the wind and waves were too high when we stopped for our swim.

We spoke with Division 2 this morning, who are doing fine. No medical issues, and no mechanical problems. Interestingly, they stopped to transfer fuel to Uno Mas, the smallest ship on the rally. 100 gallons of fuel was transferred in an hour and a half. I’m surprised that they were transferring fuel now, long before it is needed, but perhaps they decided the transfer would be needed sooner or later and wanted to do it before bad weather creeps in.

Our weather report is predicting possible gale force winds as we approach Horta. That’s still six days away, so who knows how accurate the weather forecast is. We’re not worried about it (at least for now). Uno Mas is a Nordhavn 40. Last year, a Nordhavn 40 navigated the world in 28 weeks, including making a passage of 2,600 miles to Hawaii. This raised the question of how they did it. The answer: very slowly. The slower you run these boats the farther they go. The 40 that made the circumnavigation ran the passage at 5 knots. Division 2 is cruising this leg at 7 to 7.5 knots, which shortens the range of the 40 greatly. We have the same issue here on Sans Souci. If I ever get seriously worried about fuel, I always have the option to drop my speed a knot or two and significantly raise our range.