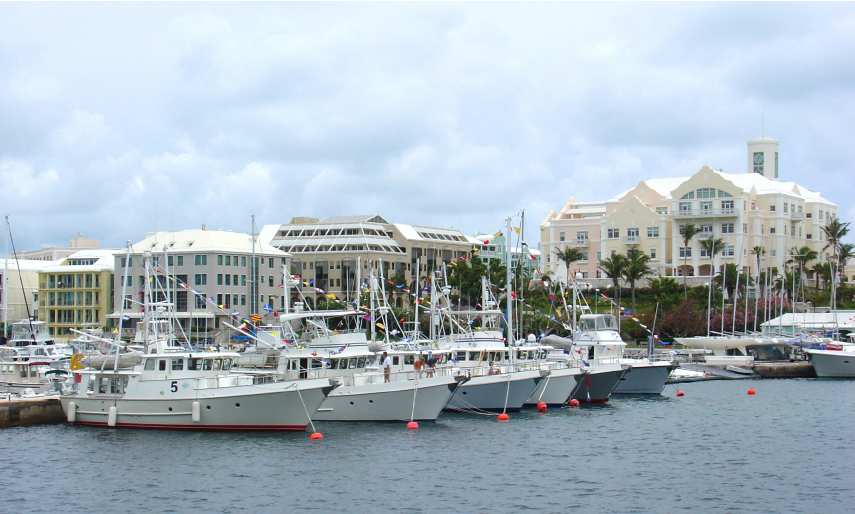 I’m late sending today’s email, as I’ve been lying on the front deck for the last couple of hours wishing I could stand up. Luckily, the seasickness passed quickly. I waited to put on “the patch” until minutes before departure, and we hit waves immediately upon leaving Bermuda. As I’m writing this we’re six hours into the voyage, and the ride has settled down to 4-6 foot waves, with a reasonably smooth ride, but for a while there we had 8-12 foot waves that were braking. Nothing even remotely scary, but my stomach didn’t seem to like it. I never like it when I can see waves higher than the back of the boat chasing me from behind!

Our departure from Bermuda was quite eventful. I mentioned yesterday that we were nervous about being able to leave the marina this morning, as there was a prediction for 30+ knot winds. To give us an easy escape, we side-tied ourselves to the dock, with two boats on the west side of the dock, two on the south side and two to the east. As predicted, at departure time we were looking at winds of 30 knots from the west.

The boats on the south side of the dock pulled away easily. We were on the east side, and were being blown away from the dock. Our only problem was that the wind had blown us far enough from the dock that getting on and off the boat was difficult. We were happily loading the tender, and had it on deck, when Kirk came running down the dock to tell us not to load the tender. Both Grey Pearl and Crosser were being pinned to the wall by the wind and needed help getting away. Grey Pearl wanted assistance with a line they had tied from their starboard side out to a mooring buoy, and Crosser was nervous that their thrusters might not lift them off the wall against the wind.

Crosser is the largest boat on the rally, at 90’. I missed the opportunity to go aboard, but everyone has been raving about it for days. One person described it as having a megayacht feel that put it in a different league than the rest of our boats. Heated granite floors, indirect lighting everywhere, modern art, a space age instrument panel, etc. Hopefully I’ll get a chance to visit her in Horta.

Crosser has what I call high “windage”. Whereas the 62 sits low to the water, Crosser has more vertical square footage to act as a sail. Crosser’s thrusters couldn’t overpower the windage to push Crosser from the wall. Our plan was to run a rope from Crosser’s bow to Garret in the tender, and hopefully lift Crosser far enough off the wall that they could drive ahead, as had Grey Pearl. It seemed like a good plan, however, unfortunately it did not work. Once Crosser was at about a 10 degree angle to the wall, they gunned it. Although their bow was off the wall, their stern was pressed firmly to it, and the fenders started working themselves out of the gap that divided Crosser from the wall. Once some of the fenders had risen above the wall, the remaining fenders found themselves overloaded, and EXPLODED! Those of you who have no idea what I am talking about can study the pictures I uploaded earlier today to the website (http://www.kensblog.com/). There’s a great shot of the damaged fenders (and the damage to Crosser).

Once Crosser’s stern was without fenders, it started digging itself into the wall, accompanied by a squeal of grinding fiberglass that I never want to hear again. This immediately caused Crosser to straighten itself out, placing it once more parallel to the wall, moving forward while continuing to grind into the wall as it went. I’m missing the best photographs, because I, like everybody else, immediately ran to Crosser to push her off the wall. To my amazement we did introduce a couple of feet of separation, which allowed Crosser to “punch it again”. This time she made it such that her bow was beyond the end of the dock, but her stern still against the dock. The wind then started turning Crosser to the port (left) side, and straight into the corner of the dock. Crosser was pivoting on the side of the dock, held there by the 30 knots of wind.

This was being made more interesting as the corner of the dock started cracking, and parts started falling off. A power pedestal broke at the base, and was being pushed to a 30 degree angle. A lamppost on the corner of the dock was leaning badly. There was a fire hydrant inches away, and I knew that it was seconds from blowing (which fortunately it never did).

As all of this was happening, things started going really bad. I’ve said before that boating is best described as days of boredom punctuated by seconds of terror. This was to be no exception. A passenger on the back of Crosser stepped onto the swim platform and leaned into the water to retrieve the fenders that were being trailed through the water. You could sense the same emotion run through all of us at the same time. Crosser weighs perhaps 200,000 pounds, and a passenger put himself in a position that could result in his being between Crosser and the wall. A unanimous chorus (all of us on the dock) advised the passenger loudly, and unambiguously, that this was the wrong time to worry about the fenders, and he stepped back into the boat.

Meanwhile, at the front of the boat, Garret had repositioned himself to PUSH Crosser’s nose to the starboard (right side). In my opinion, this was a courageous, but a very dangerous decision. Had Crosser been farther forward, and suddenly made a sharp turn to port, Garret would have been in a tough place. The tender weighs about 800 pounds, and has a 60 horsepower motor. It did help having it directly pushing on Crosser’s nose. From where I was standing on the dock, pushing on Crosser’s port side, I could see Garret to my left, with the tender’s nose dug into Crosser, literally folding itself up under the pressure.
That’s when Crosser punched it again, and Garret’s engine quit. Crosser shot forward, and I was briefly worrying that the tender would somehow get sucked under Crosser, but the tender was pushed away nicely. Garret got the engine rolling, and life was good again.

Once out to sea, we all relaxed, and perhaps to counter the tension of minutes earlier, there was some mooning that ensued. As the other boat did not return the gesture, it is possible that offense was taken. Hopefully no pictures shall reach the internet!

As the mood whip-lashed from serious to jovial and back to serious, it was time to talk about our heading. Walt Hack, our weather forecaster had suggested that we proceed due east for roughly the next day and a half rather than heading directly to Horta. Walt felt this would give us a smoother ride by avoiding rougher seas to the north, and add only an extra 8-10 hours to the voyage. Walt knows his stuff and has been guiding many of us for years, including yours truly.

Our first sign of dissent was Bob Rothman, of Emeritus, jumping on the radio to say that he had made the decision to go straight for Horta. He was convinced Walt was being overly cautious, and put us on notice of his new heading. His opinion was echoed by a few more of our boats, forcing Kirk to put the issue to a vote. We called Hack to discuss the issue with him personally, and he held firm that going direct to Horta was a mistake. After much discussion the decision was made. We’re going direct. I hope we know what we’re doing.

Being an eventful day, the next hour had more surprises for us – Garret caught us a tuna, followed by our having to take evasive action to avoid a large tanker!

On a completely different topic, exercise was a topic today. Roberta is worried that sitting still for the next 10 days will cause her to turn to mush (which really isn’t possible) – but her and St. John discussed an exercise program and Roberta kicked it off with 90 minutes of step aerobics/stretching/semi-yoga, all accompanied by ABBA (at maximum volume).

At 8:00 pm we had our standard evening report from the other division of boats. All was going well, and they are now 300 miles in front of us, also going direct to Horta. There was one concerning thing in their report, which was that one of the crew aboard Four Across appears to be passing a kidney stone. The doctor is monitoring him closely, and all is reported to be under control. The crewmember in question was not identified.

After the Division 2 update, it was time for roll call. Kirk, who has taken this duty over from Dan Streech, decided to put his own mark on the process. Roberta was assigned to the weather report (“it’s dingy, windy and bumpy out there”), Phil was asked to do a cooking tip (“When preparing sushi, use a sharp knife as it’s actually safer”) and St. John was asked for a medical tip (“An apple a day keeps the doctor away – as constipation at sea could be serious”) I suggested renaming Sans Souci to Avec Sushi to commemorate Garret’s tuna haul, but no one got the joke and I felt a bit silly (it means “We have sushi” in French). All boats answered the roll call, without surprise, except Emeritus who unsuccessfully tried to convince us that they were already arriving at port in Horta.

Lastly, we finally settled our watch schedules. Roberta and I are a team, and stand watch from 8:00 am to noon, and from 8:00 pm to midnight. We couldn’t be happier!

As my fingers are tired, and my stomach is rolling again, I shall quit typing now…
Post Views: 363
PrevPrevious PostDay 22 – Final Preparations for Departure
Next PostDay 24 – 240 miles east of BermudaNext