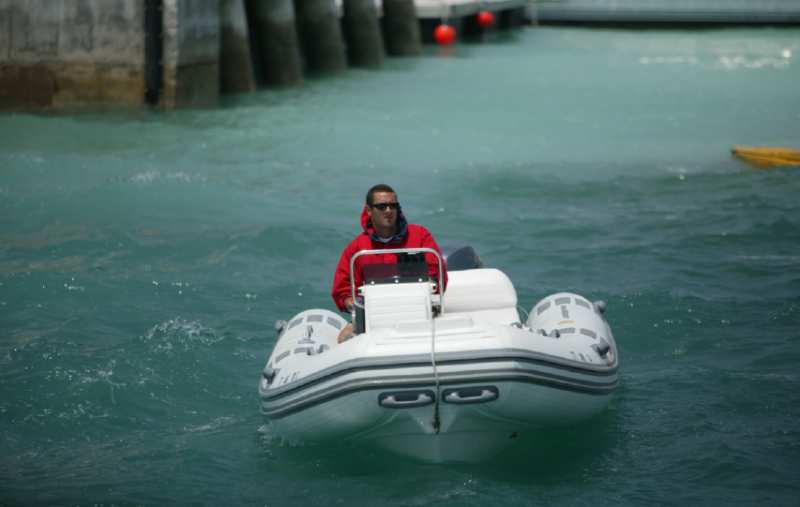 The Division 2 boats left yesterday and reported this morning that all is going well. Sea Fox, which lost a stabilizer on the first leg, has already had to lock down one of their stabilizers on this leg. They will have a very uncomfortable ride running without a stabilizer. Division 2 reported that the seas are reasonably calm as predicted (5 foot or so seas), and that they are 140 miles due east of Bermuda. It amazes me how the slow group has moved so far, given their slow speed (6 knots), but these boats are relentless. They just keep ticking off miles.

On Sans Souci, we have a surprise mechanical problem. A visitor from another boat, to whom we were showing off our new 24-volt electrical system, noticed that a bolt on the front of our engine that had shaken loose and was poking out a couple of inches! The repair isn’t a big deal, only an hour or so, but it’s scary to think that we hadn’t noticed it ourselves. I need to step up a couple of notches, the attention to detail during engineroom checks.

As soon as we finish the engine repair, we’re planning to move the boat. Currently, Sans Souci is parked perpendicularly to the pier. Her aft is to the pier, and we have an anchor dropped 125 feet in front of the boat. The Division 1 boats received surprises when they raised anchor. I find this impossible to believe, but there are cables and other underwater junk along the bottom of the bay just in front of the Royal Bermuda Yacht Club. One of the boats hooked a power cable and fortunately noticed before their anchor was fully up. Another boat partially lifted another cable. Bad weather is supposed to roll in tonight with 30 knot winds and possible thunderstorms. We don’t want problems getting away from the dock when the time comes, and with the space vacated by the Division 2 boats, we can now shift the boat to be parked sideways to the dock. We can then tie ourselves to the pier and not need to drop our anchor, making the departure tomorrow fast and simple.

We had a pre-departure planning meeting today. The weather service is recommending that we avoid weather by going due east for a hundred miles or so, and then turning northeast for Horta. Kirk White, from Nordhavn, expressed his opinion that he thought a straight course to Horta made more sense, so the plan is to go for it. If the ride is too uncomfortable we’ll re-evaluate. Kirk then shared his hope that we could get some flat water out in the middle of the ocean and try to raft the boats together. With a little luck, we can tie all the boats together and have a picnic!

My next email will be sent from at sea, and with a little luck, and smooth seas, I hope to upload some departure pictures.

P.S. – I am forwarding an email I received yesterday which I found flattering, but also very funny. I still haven’t discussed the watch schedules with Rip Knot. We saw each other a couple of times today, but were focused on last minute customs clearing issues and the engine “issue”. My guess is that for the first eight hours tomorrow the entire crew will be so excited to be underway that’ll we’ll all be hanging out non-stop in the pilot house. We’ll do the final watch schedule planning then.

Ken, I want to express my appreciation, not only for your web log that seems to be the best, and sometimes the only, regular update on the Rally, but also for the candor that it contains. You share the realities and apprehensions of the passage making life in port and on the sea. Sometimes you even share things with us before your shipmates know about them such as your decision about not rotating the watch crews. This latter situation calls for some diplomacy and I suspect you’re looking for just the right words.

Maybe something like this: “Rip, as Captain, I know you expect to be the final authority on this vessel and I respect that. But when it comes to keeping Mrs. Williams, the wife of the owner, content, I’m Mr. Williams and you’re Knot!” 🙂