Day 21 – Departure of Division Two For Horta (the slower boats) 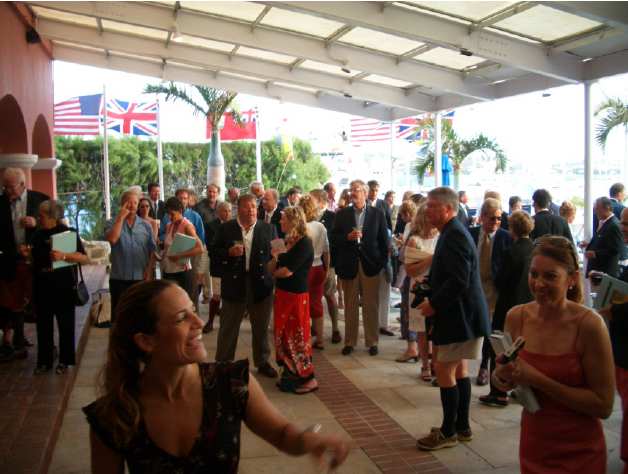 Earlier this morning I watched the departure of Division 2. Their number has grown from 11 to 12, as Sea Fox made the decision to run with the slower boats. My guess is that the decision was mandated for fuel conservation reasons, not speed. On the first leg, Sea Fox did seem to have some trouble keeping up, but that won’t be an issue on this next leg as we’re all running significantly slower. The slower boats will be running at 6.3 knots, and the faster boats, which still do not leave for another two days, will be running at around 7.8 knots. I will be very curious to see what our “Miles Per Gallon” is on this next leg. During the first leg we averaged almost exactly 1 mile per gallon, giving us an approximate 2,500 mile range. My guess is that our 10% speed reduction will boost our range by at least 20% or more. Everyone will be pleased about the idea that we should have PLENTY of fuel, because I was stingy about running the generator, which is required for the air conditioners, on the first leg.

Sea Fox’s mutiny reduces Division 1 to only six boats, or perhaps five, depending on what Emeritus does. During the first leg, Bob Rothman on Emeritus chose to run his own course, 40 miles or so away from the balance of the Division 1 boats. It will be interesting to see if he makes the decision to run independently again! On the first leg, we had no idea until the moment he came on the radio to say that he had made the decision to cut a corner. We didn’t see Emeritus again until just before landfall in Bermuda. The only explanation I’ve heard is that he values his independence.

Last night, we all gathered at the Royal Bermuda Yacht Club for a last dinner before Division 2’s departure, pictures of which have been posted on the website (http://www.kensblog.com/). Everyone seemed excited and ready to go. I was lobbied to join the slow group, and thought about it for a few minutes. It would be fun to continue to hang out with our friends in Division 2, and we even discussed using tenders to swap crews amongst the boats while underway. The downside would be that we’d be on the water a couple of days longer. After agonizing over the decision for under 30 seconds, I decided that 10 days at sea is more than adequate, and Sans Souci WILL be staying with the fast boats. Realistically, we couldn’t swap allegiances under any circumstances, as we are the escort boat for Division 1. And besides, we’ve also been strategizing crew swapping, inter-boat high-seas piracy, swimming, and possibly even some random acts of hot tubing within the Division 1 boats. We’ll see…

Roberta and Rip (Sans Souci’s Captain) had a “discussion” about the watch schedules. On leg one, we had three teams, each consisting of two people, with the same two people staying together throughout the cruise. Rip mentioned that he wanted to have the teams rotate on this next leg, so that each watch shift would have a different pairing, and the teams would constantly be mixed up. That didn’t go over well with Roberta, as she likes the idea of her and I doing our watch together. She is now envisioning a 10 day cruise where we hardly see each other, and is lobbying me to “fix it” with Rip. I don’t like giving her and I special treatment while under way, and I also hate the idea of pulling rank on my own captain – but I suspect I will be doing so soon as Roberta is right. It would really be confusing to have us working completely different shifts. We should stick together not because we own the boat, but because we are a couple, and the only couple aboard ship. That does make us different any way you look at it.

Here’s a memorable moment from last nights dinner, which political correctness implies I should NOT have noticed. The Commodore (I hope I have her title correct) of the Royal Bermuda Yacht Club was a very proper English lady, who welcomed us to the club, and as part of her greeting took the opportunity to say something to the effect of “And, as a British Citizen, I would like to salute the U.S. President, George W. Bush.” During normal times, no one would have paid much attention to the comment, but these are not normal times. I have never seen one comment divide a room so quickly. I am confident that she had no political purpose whatsoever for making the comment, it was just the proper thing to say. At our table, there were some sullen faces, with no effort whatsoever to applaud, while others applauded enthusiastically. This division seemed to be replicated throughout the room at each table. The whole incident only lasted a few seconds, but I thought summarized how different the people are that have been brought together on the various boats. Most of the boats are running with far more people aboard than normal. In some cases, these extra bodies are press people who are completely unknown to the rest of the crew. I met a reporter this morning that had just joined up with Atlantic Escort for the next leg. There are also boats such as ours with several Nordhavn employees and some who hired professional crew just for this trip. I’ve heard some rumbling that our little social experiment (combining multiple strangers in a 50’ space for 10 days of cohabitation) has had mixed results. On Sans Souci we have just said our goodbyes to Dan Streech and Christian Fittipaldi, and have gained a new Nordhavn person, Kirk White, for the next leg. If first impressions mean anything, Sans Souci will continue to be “for the most part” a calm and happy ship.

If there was any “late night” partying, I saw no sign of it. What I did see was lots of people with patches behind their ear, each of which knew they had to get up early this morning to prepare for departure. I wanted to say goodbye to everyone this morning, so I was at the dock early, with my camera in hand, to watch everyone untie. I wanted to watch reactions during the final 10 seconds after the lines have been cast off. Most people were so busy with physically getting the boat away from the dock, that they were just consumed by the process. They’ll shift into passage-mode an hour or two later. Others seemed to really understand that they were seeing land for the last time for two weeks. I uploaded a picture of Georgs in the section called “Departure of Division Two for Horta”, as he stares off the back of the boat, and it’s not hard to guess what he is thinking. In the picture, Division 2 has just left the dock for 1,800 miles of open ocean at roughly walking speed, in boats that average only about 47 feet long. And two days from now, it will be our turn…

P.S. – The wind seems to have subsided today.

WE CONTINUE TO SUGGEST AN EASTERLY COURSE FROM DEPARTURE BERMUDA TO NEAR 55W, THEN THE RHUMB LINE TO APPROACHES HORTA Mostly following wind/sea conditions will help maintain speeds and provide a more comfortable ride, while adding only a minimal amount of distance

For the SLOW GROUP departure Sunday/30th along this route expect: