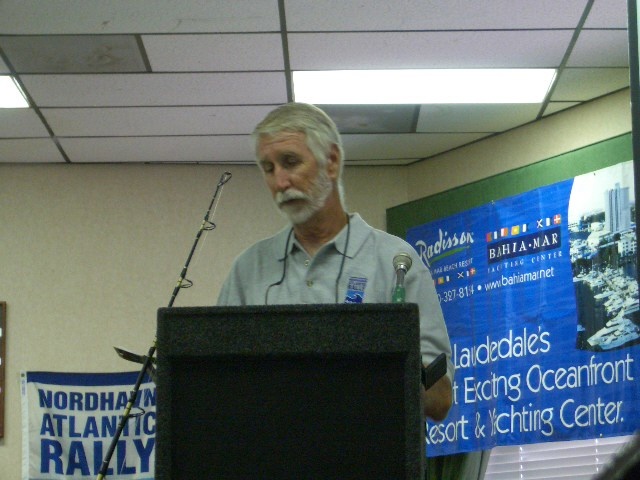 Our day kicked off this morning with an overview of some of the operational details of the voyage. We discussed many topics which will hopefully never be an issue – such as the proper method for dealing with a man overboard situation, how to refuel at sea, how to rig a harness on your boat so that you are properly prepared should you need to be towed, etc.

This was followed with a course in how to use the onboard Skymate satellite-based system for sending e-mails. Unfortunately, the process isn’t pretty or cheap. Basically, there are satellites in orbit above us, which are frequently in a convenient place to send or receive e-mails. Unfortunately, this is only about 60% of the time most places, and perhaps 20% of the time in the middle of the Atlantic.

To make a long dull story short, and hopefully more interesting, I’ll summarize by saying that e-mails, and requests for weather information only go out about once per hour. E-mails sent to the boat are similarly only received about once per hour. For this, the cost for receiving an e-mail of about 1,000 characters (a couple of paragraphs) is around three dollars! Please don’t take this wrong. Skymate is a wonderful product. Being able to send any email from the middle of the Atlantic, as compared to where the state of the art was a few years ago, IS A MIRACLE, at any price. It just seems bizarre to pay $3 for a couple of paragraphs of text, when I stream video at home for $49 per month. If you see daily updates from me that say nothing more than “We’re still afloat” during the long crossings, you’ll understand that I was just being cheap that day – it isn’t that I had nothing to say.

There were also courses today in “tuning your auto-pilot” and “fuel filtering” both of which I really wanted to attend, but instead I was bogged down working on some “issues” with the electronics on the boat.

There are a LOT of press along on this voyage. Virtually every major boating magazine is here. Roberta and I did take some time off for a video interview, as there is a documentary being made about the voyage. One of the other boats, Zopilote, is owned and piloted by Bruce Kessler, a television director who is well known and respected in the boating community.

Bruce has taken Zopilote around the world (actually its predecessor – the original Zopilote had an unhappy ending), and is going across the Atlantic with us, AND, he and his wife Joan are making a documentary about the voyage. Although powerboats have crossed oceans before, this is a VERY different trip, in that 18 powerboats are crossing at once, most of them captained by their owners who in many cases are not veterans of the sea. I’m not sure I could describe exactly what history we are making, but many times today I was assured that this was an historic undertaking –hence the documentary. Now, here’s the twilight zone part. We actually had a meeting where Bruce encouraged us to keep our video cameras charged up and laying around, so that if something interesting happens, like smoke coming from the engine room, or a boat that doesn’t respond to roll call, we would be prepared to videotape the crisis as it occurs. I understand and commend his responsibility to good documentary filmmaking, but hopefully he will forgive me if I ever see smoke, and grabbing the camera is not the first thought that leaps to my mind! It was very interesting to watch Bruce in action. As he spoke, you could see him mentally running through the documentary in his mind. Because the “actors” in his drama are scattered across 18 boats, he has logistical problems making his documentary that most directors don’t face. He NEEDS us to film ourselves at moments when we least want to be filmed. He struck me as a VERY sharp guy, and I’m convinced that he can do about anything he sets his mind to. That said, I very much hope that his documentary is 100% dull, and that nothing interesting ever happens as we wander out into open ocean.

After Bruce finished his talk, we had a lecture from our “photo grunt”. We have one person, whose “job” it is to collect all of our pictures for compositing onto one or more photo CDs at the end of the trip. As he said, it is impossible to take a good picture of your own boat, while it is moving.

I have lots of pictures of the bow of my boat, while we are moving – but no shots that I’m really happy with. Our solution: take great pictures of each other’s boats, and pool them at the end of the voyage. It was fun watching Dean, the photo grunt, explain the concept of mega-pixel digital cameras to an audience of boaters. I suspect that boating skills and computer skills are taught at different universities, as some in the room didn’t seem to understand when Dean explained why jpgs use lousy compression, and what this means. One interesting part of the talk for me was when he talked for a moment about how to handle anyone who was shooting a true “film” camera, and I looked around the room, and didn’t see a single film camera. I hadn’t realized how pervasive digital cameras have become. I should have known. We had the good fortune of having Dan Streech, the CEO of PAE, the manufacturer of Nordhavn yachts, such as our own Sans Souci, along at dinner. Dan and his wife Marcia are wonderful and charming people. Dan will be accompanying us aboard Sans Souci on the run from Florida to Bermuda. For Roberta and I, this was our chance to ask all of the questions we were too embarrassed to ask in front of the whole group, such as “How long does sea sickness last?” and “Is it ok to throw paper plates overboard in the middle of the ocean?” Dan answered all our questions, and more. It will be awesome having him aboard for the first leg of our grand voyage. A very real goal for Roberta and I is to move ourselves “the next step” towards becoming “real boaters”, and I can’t imagine a better way then being able to get private lessons from people like Rip and Dan.