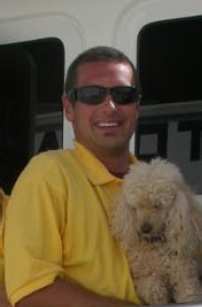 We’re still here in Bermuda waiting for the next leg of our voyage. We’re not going sightseeing until the afternoon, so I thought I’d answer a bit of my email (I’m receiving a LOT of email. I apologize for not responding to each of you individually)….

A lot of people seem very curious as to how it is working out to have eight quite different people all living together on the ship, and would like me to comment more on how we are all getting along. There are a few answers to this. The one that leaps to mind first is that I really don’t know my shipmates that well. They all seem to be perfectly charming people, but we really haven’t spent much time talking. I’ve gotten to know Dan Streech, Christian Fittipaldi and Rip Knot at least a little, but the balance of our crew I really haven’t spent much time with. When we are underway, it is difficult to talk. It seems to be different for others, but I’ve found it impossible to hold a conversation while bouncing through the waves. Plus, I’m not generally someone given to hours of small talk. I spend most of my non-watch time sleeping, working with my computer, or when the water is flat, reading. There’s also a recognition that our lives might depend on having a good working relationship. I’m concerned that we are all very different people, and there is the possibility that clashes could occur. It is critical that we avoid this. Recently though, I’ve become convinced that this is a non-issue. The more I learn about our crew, the more I like, and respect, them.

Speaking of which, I’m getting a LOT of email asking for more information about the crew….

St. John is our emergency medical technician. He’s a young college student, who I would guess is around 25. He blows me away! He already has seven years of experience working in ambulances, and has a clear vision of his career plan (he wants to be part of a helicopter emergency rescue team). He’s quiet, highly focused, serious, and likes to sleep. I do what I can to make him smile, which is funny – because he is the funniest person aboard ship. He has some great lines!

Garret works for PAE, but I’m not sure in what capacity. I haven’t spoken with him that much, but the first word that leaps to mind when I do is: capable. It doesn’t seem to matter what I ask, Garret can do it. When a call came in from Goleen asking if we had anyone aboard who knew water makers, it wasn’t a surprise when Garret said “I guess that would be me.” When we were discussing who would install the electronics for the new alternator, Garret said: “Well, I guess that would be me.” Once again, he is a young man in his 20s, but also someone who is clearly going places.

A true stand-out on our crew is Phil, our chef. I remember thinking we were taking a chance bringing him on board, because he had no boating experience, and limited cooking experience. I don’t know the whole story, but Phil has an entire career behind him as an electrician. He then decided to go to culinary school and become a chef. He has been cooking over the past year aboard a high-end dinner train that runs the west coast. I think I remember that Phil said his long-term goal was to become a personal chef. His reputation is expanding by the day. Whoever gets him will be very lucky, in that not only is his food at the highest level imaginable, his personality is so dynamic that you just like being around him.

Rip, our Captain, I’ve known on and off for many years. Rip’s name tells you a bit about him. He lives for the sea. His whole life revolves around boating. When not at sea he earns his living repairing boats, and my recollection is that he lives on a boat. I’ve seen Rip both as a fierce taskmaster, and also as a friendly companion. He takes the sea seriously, and understands how serious any mistake can be. He has thousands of hours experience at sea, and has a mastery at operating Sans Souci that comes only from decades of experience.

During this next trip, my hope is to collect some feedback for my daily report from the crew. I’m quite curious what they are thinking….

Here’s a comment about the problems I had with electronic charts towards the end of Leg One: “ … Your chart error is not unusual. Read Niegel Calders new book “How To Read A Nautical Chart”. There he spends considerable time discussing the increasing problems with the inaccuracies of electronic charts. The problem is simply that GPS is extremely accurate but the charts are not. You are trying to blend the accuracy of GPS with charts that may have been first compiled in the 1800″s. Always have paper in front of you. Duane “

How do you handle watches when you and Roberta are running your boat alone 99% of the time? Thanks so much for the regular messages. They’re great. Capt. Steve Larivee Longmeadow MA.”

I apologize for having been a bit confusing in my writing. Historically, Roberta and I have always boated alone. We have had Sans Souci for six years, and with one exception, a dinner cruise, we have always run her alone.

We are extremely private people, and don’t like the idea of living in a small place with other people. When we were designing Sans Souci, we deliberately designed in crew quarters, and even added a refrigerator and stove to the forward cabin. We knew that we did not want crew, but also thought it was possible that Sans Souci would turn out to be too large and complex for Roberta and I to run alone. Nordhavn was assuring us that several 62’s were being run by husband/wife teams just fine, but we weren’t convinced. Also, our original vision for Sans Souci was that we would take three years to circumnavigate. We thought we would fly in crew, or family, as needed, for the long passages, and run the boat ourselves on the short runs.

Please do not interpret this as a reflection on Rip, or any other Captain. Rip has been impressive on this voyage, and I would hire him again in an instant. Rip and I have discussed the possibility of his continuing as the captain of Sans Souci, but with the understanding that this means that 99% of the time Roberta and I will run her alone. Rip would be responsible whenever we are not onboard, and for assisting us on long passages, or for delivering Sans Souci when we decide to “cheat” and fly to Sans Souci’s next destination. I’m not sure how these discussions will evolve, but want to go on record as saying that Rip is a great captain, and that this is not a Rip, or any other Captain, issue. We have family that we love, that I’m not sure I’d want to share a 70 foot long space with for several months each year. Sans Souci is our home several months per year, and we’d rather live alone.

Overall, we’ve had no problem running Sans Souci alone. That said, there are times when having more people on board would have been nice. Raising and lowering the tender has been complicated at times with just the two of us (I discussed this yesterday). Going into strange ports is something we’ve been reticent to attempt. Frequently we anchor out, and tender into a port, just to avoid trying to slide Sans Souci into a tight parking place with just the two of us. I’ve watched crews of ten people each working a fender to bring a boat into a tight berth at St Tropez, on many occasions (remember: in Europe, there are no “finger” docks.) Even anchoring out can be problematic. I am always nervous to leave Sans Souci at anchor unattended. Winds in the Med can rise quickly, and if we are ashore enjoying dinner, we might not be able to tender back. I’ve seen many anchors come free in high wind, and it’s never a pretty site. An unattended boat with a dragging anchor would be disastrous.

As to our desire to circumnavigate, I’m not sure what the status is. We bought Sans Souci six years ago, with the intention to take her “around the world.” After cruising in the Pacific Northwest for a couple of years, we continued to talk about circumnavigation, but it was becoming apparent that it would be impossible for us to commit more than three months per year to boating. Our lives may change over the next few years, but for now, three months per year of live-aboard boating is the absolute maximum. As we thought about leaving Sans Souci alone for nine months a year, in foreign countries, reality started setting in. Thus, we decided to follow an alternate approach. We shifted our thinking to moving the boat somewhere where we could feel good about parking the boat for months at a time, and then using that as the hub for our cruising. In 1999, we had Rip deliver Sans Souci to France (on its own bottom from Seattle to Florida, then freighted to Toulon France.) We have had Sans Souci in a boat slip in France, just outside Monaco, for the last four years. From this hub, several countries can easily be reached, none requiring a long passage. We’ve had four great summers exploring France and Spain. We had planned to circle Corsica this year, and to run the boat to Greece next year.

However, we have decided that it is time to bring Sans Souci back to Seattle. Once we complete this voyage, and do a few weeks of exploring the Med, we will be freighting Sans Souci to Seattle, and run her in the Pacific Northwest for a while. We have had problems with keeping Sans Souci properly maintained in France. We have a very nice gentleman who has been looking after Sans Souci in France, but overall, the depth of experience in maintaining trawlers in France isn’t the same (today) as it is in the US. The war has also made it a bit more awkward to be an American in Europe. France has a large Muslim population, and although we’ve never personally experienced a problem (with Muslims in France), it is an understatement to say that relations are “strained” between our two cultures. There are discussions of choosing a new “hub” for Sans Souci. Our goal would be to find somewhere that is central to a wide range of cruising opportunities. Whereas we’ve cruised extensively throughout the Pacific Northwest, we’ve never ventured north to Alaska, as have many of our friends who are quite passionate about cruising there. My guess is that we will cruise for a year or two between Seattle and Alaska, take the boat to Cabo for at least one season, and then move it to a new hub. My discussions with Christian have me thinking about the Caribbean or the Bahamas, although I have a strong sense that Greece and Turkey are part of our future. We’ll see.

I really need to kick myself to stop thinking beyond the Azores. We still have a lot of water to cross on this current crossing that I need to focus on…
Post Views: 314
PrevPrevious PostDay 18 – Bermuda
Next PostDay 20 – Division Two (the slower boats) leave tomorrowNext