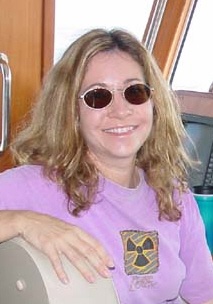 I’m currently taking a one-week hiatus from doing the daily update, as we’re actually not on the boat this week. Roberta and I are spending the week doing standard Bermuda tourist activities, while staying in a hotel that is literally in front of our own boat.

Roberta and I were briefly on the boat yesterday in order to pick up a few extra things – like more dog food – and, while there, we spent some time on another 62,the Grey Pearl, getting to know her owners/Captains, the Joneses. Roberta was telling me about her time on Sans Souci, and I talked her into adding her comments to my weblog:

Yesterday afternoon, Sunday, while Ken and I were visiting our crew on the boat after a relaxing night staying in an air-conditioned hotel, Dan Streech told us an amusing story about the housekeeping service that I had arranged to clean the inside of the boat upon our arrival the day before. Several days prior, while still at sea, I had called the Royal Bermuda Yacht Club for recommendations about a boat cleaning service for inside the boat. They recommended a cleaning service and gave me the phone number. I had called the service and arranged for them to be at the boat around 2:00 p.m. on Saturday, giving us plenty of time to arrive, get through customs, ‘kind of’ clean things up a little bit, and pack our suitcases for our weeklong hotel stay. (By the way, we’re staying at a wonderful little hotel, the Waterloo House, which is right on the harbor and overlooks our boat.)

A couple of hours after our arrival at 9:00 a.m., Ken and I left the boat, bags and dog in hand, with cleaning instructions for Rip to give to the cleaning crew once they arrived. They came, all 6 of them, ready to clean the interior of the boat from top to bottom. One guy even wore the vacuum cleaner as a backpack on his back! According to Dan, they spent about three hours on the boat, and they literally rubbed and scrubbed every inch of the inside of the boat. It was spic and span indeed! Here’s the ‘humorous’ part: Dan had kindly offered to pay for this cleaning as a sort of ‘thank you’ for letting him and his crew spend this past week on Sans Souci. I had taken him up on this offer. Had I known though, that the bill would have come to $435.00 – that’s American dollars, not Bermudian money! – I wouldn’t have let him pay this cost, or at the very least, I would have warned him of the price. However, I had neglected to ask the particulars of this cleaning job, and so, just trusted that it would be one or two persons, and would probably come to ‘around’ $100.00 or so. Dan was very nice about it, though. He cheerfully paid the bill, and then thought it kind of funny to tell me this story during our Sunday afternoon visit. The moral of the story though is this: When calling for any service, ask the particulars first, and approximately how much it will cost before contracting the job. Normally I do this, but didn’t even think about it in this case. I don’t know that we had needed 6 people to do the job, but, at least the boat was nice and clean; they did a good job.

Another Sunday note: after gathering a few things (dog food, etc.), we spent an hour on Grey Pearl drinking cocktails and getting to know her gracious owners. We shared laughs and stories about our crossing and mused about what we might do once we arrive in the Med. Immediately afterward, we all attended a barbecue sponsored by P.A.E and the Royal Bermuda Yacht Club. It was a very nice get-together for all of us. Plenty of food! Thank you P.A.E. and Royal Bermuda Yacht Club!

Today, Monday, is a National Holiday here in Bermuda. It’s called Bermuda Day and I’m told it’s similar to our Memorial Day in the U.S. as it semi-officially starts off the ‘summer’ season. Everybody has the day off and there are boat races, picnics, and a big parade in Hamilton, the ‘big city’ of Bermuda. As I write this on Monday morning, Ken and I are looking forward to our participation in Bermuda Day!

Parade participant plays the Sax while on horseback

We have started to talk to some of the other rally participants about “what happens next” after the rally. There is starting to be some momentum towards a few boats running together to France. Grey Pearl has spoken of tagging with us, as has Strickly for Fun. I had assumed that everyone already had firm plans on what to do after we reach Gibraltar, but if the few people I’ve spoken to about life after the rally are an indication, then in true boater style, “no formal plans have been made.”

I speak French, and know some very cool places to drop anchor in the south of France. Roberta speaks Spanish, and we’ve also done some cruising in Spain (Mallorca, Ibiza, Barcelona and Formentera) – all of which were incredible. The great thing about the Med is that things are so close together. A trip from Gibraltar to Mallorca is only a day’s run. From there to Barcelona is under a day as well. And from there, its less than a day to France, and then Corsica is only a day away, as is Italy! We have a lot of Atlantic to cross before we start to think these thoughts however, and perhaps it’s bad luck to think beyond this particular passage, but as we get closer, I can’t help remembering all my favorite places…