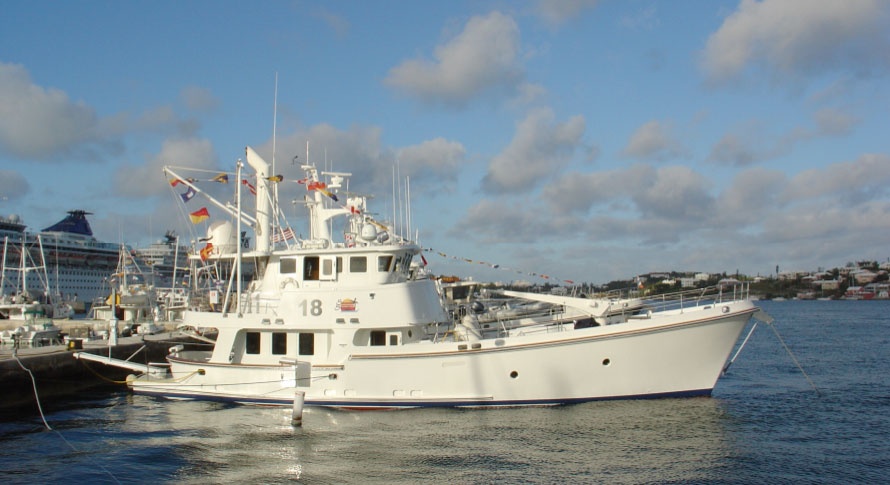 Roberta and I have now moved off of Sans Souci, and into a hotel. We’re in port in Bermuda, and will be here for at least nine days. This is my last “daily update” until we get ready for the big run to Horta (around June 1st). I will continue to take pictures of the boats, and to rummage through my existing photos for images worth posting, but 99% of our time here in Bermuda will be spent “just being tourists.”

The crew is staying on Sans Souci. We moved into a hotel for a couple of reasons: a) I wanted a high-speed internet connection, and b) we’re living with strangers on Sans Souci for over two months. Thus far there hasn’t been any serious conflict, but the possibility certainly exists. I think the best way to ensure long-term peace is to give each other the maximum amount of space when possible. Actually, everyone has bound together VERY well, and is having a great time – however, we’re all from very different backgrounds. Outside of this trip, I would be surprised to see this group hanging out together

The next leg of our journey is the one that worries me most. Weather-wise, it has the potential to be the most perfect. We’ve spoken to several people who have done the crossing recently (between Bermuda and the Azores) and all have experienced perfectly flat seas. What concerns me about this leg is the overwhelming distance involved. 1,800 miles is nothing in an airplane, and not even much of a drive, but for a small boat it’s a serious distance. The smaller boats will be at sea for a full two weeks, and we’ll be out there for eleven days. It’s unlikely that anything will go wrong, but if it does, help will be a long way away. Based on our fuel consumption on the first leg, we’re in great shape as far as range is concerned. We burned roughly 1 mile per gallon – 900 gallons for a 900-mile passage. We were even a bit wasteful on fuel, as we knew that we had plenty of fuel on board. We ran the generators (gensets) far more than we will be running them on this next leg, partially because of the failure of the hydraulic alternator, and partially because there was no reason not to. The washer and dryer were running quite often, a luxury that we may not have on this next leg. With the hydraulic alternator, we can do quite a bit without powering the generator, but not everything at the same time. There will be tradeoffs to be made, and we’ll have to be smarter about understanding these on the next leg than we were on the first. Sans Souci carries 2,400 gallons of fuel, which implies that we can arrive with 600 gallons left over. We can also take at least an extra 100 gallons in an oil drum we use for holding used oil.

Exhaustion will be a major factor on this next trip. Our crew is dropping from eight persons to seven. Many of the boats are running with four or five, so I’m not complaining, but it means that we won’t have a spare person on the watch rotation as we had on the first leg.

Christian Fittipaldi and Dan Streech are leaving us here in Bermuda. Another PAE employee, Kirk White, will be joining us. I’m not sure of Kirk’s position at PAE, but it’s clear watching him in action that he knows the boats systems better than almost anyone. He will be a huge positive for us. We have split the crew into three teams of two persons who will be doing “watches”. Chef Phil has a more than full time job keeping us fed and full of coffee, so he doesn’t do watch. For those not familiar with “watches”, I should give a quick description. 99% of the time, Sans Souci drives herself. It is entirely possible, and quite likely, that during a watch, the person piloting the boat will never do anything to actually drive the boat. The person on watch needs to be qualified to run the boat, in case action is needed, but most watches really consist of not much more than “watching”. The autopilot knows nothing about logs that might be floating, or sailboats crossing your path (sometimes running at night without lights) or even large freighters that don’t slow down or change directions for anything. The person on watch needs to constantly monitor the radar and the radio. Additionally, the instrumentation needs constant monitoring, and the engine room needs visiting periodically. We do engine room visits at least every 2 to 3 hours. I have remote controlled cameras in the engine room that allow us to see what is occurring, and even zoom in on specific gauges, but there is nothing like being in the engine room, using your senses of touch and smell, to tell you if everything is as it should be. A proper watch shift is not a relaxing experience. It’s 3 or 4 hours of having to be very alert, and ready to make serious decisions quickly under pressure. Each team does two or three shifts per 24-hour period. We split the watch shifts to give some time for rest, so that you are never on watch for more than four hours straight. Nighttime watches are 3 hours long, and daytime watches are 4 hours. The luxury we have that most boats don’t is being able to run two person teams. This means one person can watch the other. Falling asleep while at watch is a serious concern, and has resulted in many accidents at sea. The extra person can also fetch snacks, do engine room checks, and cover during the inevitable bodily function breaks (which can’t really be delegated). I am sure that for those of you reading this who have never done a passage, it doesn’t sound like much work to spend only eight hours per day watching the boat, and rest the other 16. I wish this were true. It fatigues you in a way that I can’t explain. The boat is in constant motion. You can’t generally do such simple tasks as walking without holding on. Exhaustion leads to errors, and I have no statistics, but am convinced that more accidents have occurred as a result of human error than as a result of mechanical failure.

On another topic, I sent my son Chris a note asking whether or not he was receiving the daily updates. Chris is a super-intelligent, but sometimes-gruff person. His response: “Why would I care about the experiences of a bunch of old rich dudes?” Chris is way off base with his question, and I’m responding to him here, in case there are others that have this misconception. First off, the owners of these boats are not dudes. They are mostly retired couples, and in many cases, couples who are still working and taking some time off, or who have found a way to work from their boats. As to his contention that we are old, I’ll partially agree to this, although it depends on your perspective. Chris is only 25. I remember being 25 and thinking 30 year old people were old. Now that I’m in my late 40s, I’d happily swap ages with a 30 year old. Most of the owners are in their 50s or 60s (my opinion, although I must admit that I’m terrible at judging ages). I know of at least one owner who is running his own boat, in his 80s. I know of at least a couple of others who are in their 40s, and know of some who are self-schooling young children while boating around the world. We don’t have a lot of people here in their 20s and 30s mostly because it takes a while to save up enough money to buy a boat, and because most people can’t take time off for world cruising while they still have a job. As to Chris’ contention that this is a crowd of rich people, I suspect that he would be quickly thrown overboard if he were to say such a thing anywhere near this crowd. There are some well off people here, and perhaps some that qualify as “rich,” but Chris is completely wrong in his characterization. I don’t know any of the people here well enough to know their finances, or even to render an opinion on their finances, but a lack of knowledge has never stopped me from commenting, so I’ll continue in that tradition. My sense is that most trawler owners have saved most of their lives to have a trawler. It is not something they bought with spare pocket change. Many of them have thought long and hard about the costs of living aboard a boat, and have their monthly budget thought out almost down to the dollar. One of the tough realities of retirement is that your money needs to last you for the rest of your life. Every dollar counts, because you really don’t know how long you will live, what interest rates will be, how much you need or what inflation will do to the value of savings. I overheard several of the rally participants complaining about the cost of receiving an email while at sea, and some even passing on having email because of the potential cost of receiving an unwanted email. I watched a group of owners enthusiastically band together to negotiate a better price for fuel. Techniques for minimizing expense are a big issue for essentially all of the rally participants. Most do the maintenance of their own boats, and can talk for hours about how to minimize operating costs aboard their boats. Sans Souci is very unusual in having a chef on board. I’ve heard of only one other boat that has done this. It’s a controversial comparison (and I may be alone in my opinion), but I think an accurate one, that motor homes and trawlers are similar. The kinds of people that generally buy them are people that want to travel, and take their home with them. For the most part, it’s a lifestyle decision, not a rich-person’s plaything. Roberta and I are boating people. We knew long ago that living aboard a boat was part of our future, and have always had boats. And, as this rally shows, we are not alone….

Talk to you in a week!

Post Views: 365
PrevPrevious PostDay 14 – Arrival in Bermuda!
Next PostDay 16 and 17 – In BermudaNext