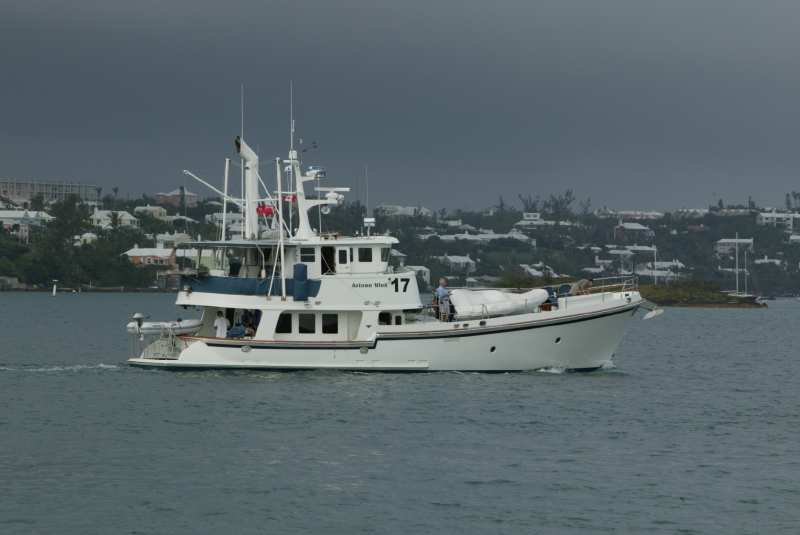 Arrival went smoothly, although it didn’t seem like it at the time.

The Bermuda advance team asked that the larger ships arrive first, so that we could unload our tenders and help the smaller boats come into the marina. You can’t imagine how happy we were to hear this. Even though we were 10 miles behind the lead group when this news came in, with only 10 hours left, we jumped on the opportunity. We rocketed to 9.5 knots, and stayed there until we were comfortably in front of the slower group. Although this is not what many think of as high-speed, it sure felt like it. We had a 20-knot tail wind that kept the autopilot in a confused state, as we slid back and forth, surfing the 3 to 5 foot seas and working our way through and around the slow group.

Autumn Wind arrives in Bermuda under a cloudy sky

I didn’t like how Sans Souci’s engine sounded at 1,800 rpm, and was anxious for the moment when we could slow down. Dan assured me that the Lugger wasn’t working hard at all, which should have calmed me, but my nature is to be cautious. Accidents happen when you get in a hurry. As usual, there was nothing to worry about EXCEPT: Rip and I were on watch as we got into range to see the lights of Bermuda through the binoculars. We were running with Crosser, Autumn Wind, Grey Pearl, and our group was lead by Goleen. About 10 miles from Bermuda, Rip and I started noticing that we were drifting to the right of the other boats, but that the computer mapping system showed us as needing to turn farther right. For about 15 minutes Rip and I were highly focused on finding the problem. There was a temptation to believe the computer mapping system. Through thousands of miles, it had never failed – but, something felt wrong. Either Sans Souci was off course, or the other boats were. In this case, we had plenty of time to search for the error. We were running further south than where we felt our track should be, but as there was only open-ocean to the south, we felt no need to correct anything until the problem had been identified. After comparing the boat’s GPS with what we were seeing on the computer, we realized that the computer map was off by a full six miles! We rebooted the computer, which accomplished nothing, and then switched to a completely different chart which immediately corrected the problem. Had we been running alone and approaching Bermuda from the north, it could have been a dangerous situation. Once things calm down, I will be investigating how this could have occurred. The one thing I know for sure is that we have a chart with erroneous data.

The actual arrival in Bermuda was far simpler than I had anticipated. We had to run our way through a narrow channel, but nowhere near what I had expected. Even the actual Med mooring of Sans Souci was anticlimactic. Perhaps when we head to sea again, I’ll devote an entire daily update to the Med tie. The short story is that generally in Europe there aren’t boat slips. Marinas are much more crowded than in the US. You back the boat to a wall, and attach yourself in the front either to a mooring buoy, a line to the bottom of the marina, or drop your own anchor prior to backing to the wall. Usually, you are parking in a space that is narrower than your boat, and you have to force your way to the quay by rolling your boat forcefully against the fenders of the neighboring boats, pushing them aside slowly. Even backing into the slip can be interesting, as there is rarely adequate space to turn, and winds often add to the excitement. All of this taken into account, even though Roberta and I have run the boat alone in Europe for the last four years, I made the decision to have our Captain, Rip, bring the boat in. As we approached the Royal Bermuda Yacht Club, I saw immediately that we were backing to a bare wall with a huge bay to position ourselves in. With 20/20 hindsight, I should have pulled rank on Rip and brought the boat in. He wouldn’t have been happy, but I think he would have understood.

I’ve been typing this while awaiting the arrival of customs. I’ve been watching the other boats arrive, and want to get out and shoot some pictures. I’m not sure when I’ll be able to get anything uploaded but assume that by tomorrow I should have our arrival pictures on the site, as well as more pictures from the first leg of the trip. Happy to be here! P.S. – I wish I had a picture of Shelby’s face when she saw grass for the first time in five days. We have a very happy dog!