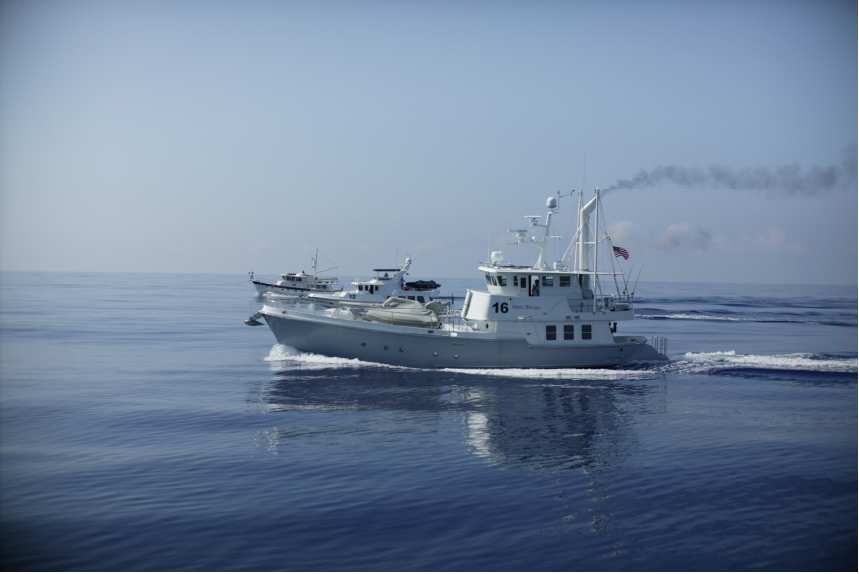 After days of bouncing around, Grey Pearl and the rest of the participants enjoy the calm seas

We’re in absolutely calm seas as I write this. Sail boaters would not be happy, but as power boaters, we’re loving it. Yesterday we saw our first whales. I saw the spout, and sounded the alert, but then no one else saw anything during the next 30 minutes. Just as people were convincing themselves that I was crazy, Braun Jones, from Grey Pearl, announced that he had a whale on his port side. Instantly, we all were sighting whales and porpoises in every direction.

The calm seas revitalized the crew. Christian and St. John took folding chairs out to the front deck and spent the afternoon sunning and reading. Smiles had become the dominant facial feature. A perfect day!!! Blue skies, sunshine, flat water! Fishing poles are springing from the backside of each boat.

Our boat is very laptop and internet centric. With the flat water, everyone got their laptops out to catch up on e-mail. The pilothouse table didn’t have a square inch free for me to plop down my laptop, so I went downstairs. No luck. The downstairs table was wall-to-wall laptops. We had achieved 100% laptop usage! Sans Souci has a wireless network and satellite internet connection. We’re all sharing an internet connection that is slower than most dial-up modems, but no one is complaining. I even uploaded a few pictures. If anyone has a particular person or boat they want me to take pictures of, let me know. My original vision was to take thousands of awe-inspiring pictures. Reality has differed. The other boats are separated from us by about a mile. We do feel a sense of team spirit as we talk, via radio, all day – but no great pictures have emerged.

Dinner last night was incredible as usual. Phil is a huge hit on the boat. Last night: Caesar Salad, Mashed Potatoes (both regular and low-carb), Meat Loaf (once again regular and low-carb). Cheese cake and fresh cherries for desert. I’ve never been much of a Meat Loaf eater, so I fed mine to some hungry fishes, but everyone else raved about it. All signs of discord had evaporated with the high seas. We have a no-alcohol policy here aboard Sans Souci, but I made the decision that one bottle of wine split eight ways couldn’t do too much damage. I made a conscious decision not to load any wine aboard ship. We have a few bottles on board that have been here for years. The boat was in France last year, for the hottest summer recorded in many decades. My assumption was that all we had on board was a few bottles of vinegar. I’m now happy to report that at least one bottle did survive.

Our group, Division 1, consists of seven boats, one of which we haven’t seen in two days. Emeritus made the decision to split from the group and take a “short cut” across the top of the Bahamas. We’ve touched base with them once a day via sat phone, but they have consistently been out of VHF radio range. I noted early on that boaters have strong independent personalities and each day reinforces that opinion.

Our daily update had nothing but good news. No new mechanical problems. No one is seasick. In Division 2, they dropped a tender (dinghy) and were traveling from boat to boat, transferring crew. They are talking about fishing from a tender today. Interestingly, we have closed to within 45 miles of the Division 2 boats. By tomorrow we could be close enough to see them.

We are still running without an alternator. To get by, we are running a generator every few hours to keep the batteries charged. My hope is that a new alternator will be waiting for us in Bermuda. I’m still nervous about our fuel consumption, and have set a goal to make the long passage from Bermuda to the Azores without running the generators. We have two water makers on board; a small one that only makes about 10 gallons an hour, and a large one that consumes roughly the same amount of electricity as Las Vegas at the height of tourist season. I’ve been running the little water maker around the clock for the past few days, and it seems to be keeping up! If we continue to run the little water maker non-stop, and our new alternator shows up, the generators will get some serious rest – and we’ll arrive in the Azores with a huge fuel surplus.

Lastly, we had a small bit of excitement last night – which helps explain why you always need to be on your guard aboard a boat. At around 4:00 am, during Garret’s and St. John’s watch, Grey Pearl called to say that we had a UFO dead ahead (Unidentified Floating Object). It did not show on our radar, but was coming at us from about two miles out, and was moving at .5 miles per hour. Rip kicked off the trip by telling us a story, which may or may not be true, but is likely to have been in our watch team’s minds at the moment. The Atlantic is constantly being crossed by freighters, which carry railroad-sized containers on deck. Usually the ships arrive at their destination with all containers exactly where they were put, but from time to time, during a storm, some fall off. In Rip’s story, most of these sink, but some of them don’t. The others are floating just below the surface waiting for us. This particular UFO refused to reveal itself, in spite of our team’s scouring the ocean with a giant searchlight. They were guided by radio from other boats whose radar did show the UFO. As Murphy’s Law would predict, this is the exact moment that our autopilot chose to go crazy. I had noted on my watch earlier in the evening that the autopilot had developed a nasty habit of making giant “S” turns.

It would suddenly veer left, only to veer to the right a few minutes later. Sans Souci does have a steering wheel, but it really isn’t meant to be used under normal cruising conditions. The computer does a far better job steering than the average human. Theoretically, we could make an entire passage with just hand steering, but it wouldn’t be much fun, or very pretty. Sans Souci has a backup autopilot, so I made the switch to the backup, and alerted the incoming watch team to the problem (Dan and Christian). During their shift all was well, but Garret and St. John discovered that this would change at the worst possible moment. Sans Souci made up its own mind that an unscheduled right turn would be good. This put us on a course to intercept Goleen. Instantaneously, Goleen was on the radio to announce that we had invaded their “space.” Garret and St. John handled all of this without missing a beat. The autopilot was brought offline immediately, and they were able to circumnavigate the mysterious UFO, which still remains unidentified. We are now running with the autopilot, but in a completely different mode. Hopefully it holds no further surprises for us. Mr. Kessler, our filmmaker, will be disappointed to hear that no one grabbed a camera (not that a picture of an invisible object is very exciting…)

I’m going to work now on uploading a few more pictures. As I type this, Grey Pearl is within a hundred yards of us on the starboard side, with Crosser just behind. Time to get the camera out!