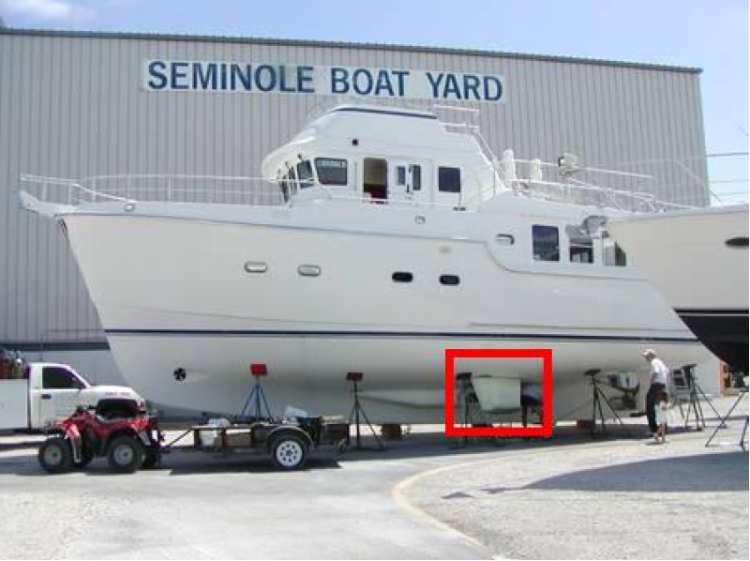 The seas have calmed down. It’s still tough to walk or read, but overall we’re quite happy, and hoping it stays this way. We heard last night that another of our boats, Sea Fox, lost a stabilizer. For those that don’t know what stabilizers are, here’s a bit of background: Stabilizers are small “wings” that protrude from the side of the boat, about three feet beneath the surface. When you see a boat out of water the stabilizers are easy to spot. They look like short wings that one might see on an airplane. On Sans Souci they protrude approximately six feet on each side. Unlike airplane wings,the entire fin (the nautical word for the wings) moves to counteract the movement of the boat. The stabilizers do nothing to prevent the nose of the boat from rising and falling, but can greatly diminish side-to-side rolling. The fins are controlled by their own computer and gyroscope. Aboard Sans Souci, we do nothing to manage the stabilizers other than to turn them on. When we have guests on the boat, it’s always fun to turn the stabilizers off for a minute in rough seas. It only takes a few minutes without the stabilizers for our guests to understand why they are amongst the more critical components on the boat.

Just as stabilizers can make your life comfortable when they work, they can make it hell when they don’t. Here on Sans Souci, when we hear reports about boats that have “lost a fin”, we know that what we are hearing is a very condensed version of what really happened. Performing surgery in the hot engine room of a moving boat is serious stuff. My guess is that in order to work on the stabilizers, the first step is to shut off the stabilizers– which causes even more rolling about. I overheard Dan’s reaction when he first heard that one of our boats was going to try to “pin a fin” (disable it). He said “I wish them luck, because if you aren’t very careful, you can easily lose a finger” The fins are trying to stabilize boats that are extremely heavy. Sans Souci weighs 120,000 pounds. To access the stabilizers you need to crawl your way through a hot, constantly rolling, engine room. Then you need to diagnose the problem, and try to take one fin offline in such a way (I would assume) that it can free float, while the other can be brought back on line. Dan assures me that San Souci’s stabilizers are of a type that are much less likely to fail. During the night, we had a close encounter with another boat from our own group (whose name I shall not reveal). We still do not know the whole story, but last night ata bout 2:00am they suddenly shifted course to start coming straight at us. Garret and St. John were on watch and noticed the other boat coming closer. Normally at night, we run with at least a mile of separation from each other, for safety reasons. When the other boat closed to under a third of a mile, and a collision was starting to look possible, Garret took prompt action. Above Sans Souci we have a powerful searchlight. Garret pointed it at the other boat’s pilothouse and hit the search beam. That got their attention and the immediiately turned away from us. I asked him why he didn’t call them on the radio, and he just shrugged.

For this morning’s roll call, Dan decided to add a little more drama. We have an XM Radio onboard, with 120 channels. We found one with just the right type of music, and after transmitting a burst of loud rock music, Dan came on the radio to do his best “Good Morning Vietnam!” impersonation.

During the roll call we discovered that the slow division of boats is currently about 90 miles ahead of us. They were 110 miles ahead yesterday. We’re closing on them at the rate of slightly over 1 mile per hour. Once we catch them, we’ll hand the helm over to Christian Fittipaldi, our Nascar driver, so that we can appropriately blast by them. As soon as we have them looking at the back of our boats, we’ll strategize further action. Hopefully they have a sense of humor…

Several people have sent us e-mail. To all of them I say thank you! Several have asked for more pictures. I’ll try to make that a priority this afternoon. Unfortunately, our internet connection isn’t good for much beyond text. I did manage to upload four pictures after we left shore, but do not know if I can repeat that success. If I am successful in uploading, I’ll put the pictures under the Nordhaven Rally – Photos -Part I section, with a heading that says May 18-22 – Fort Lauderdale to Bermuda. Once we get to Bermuda and get a high-speed internet connection, I’ll post MANY more pictures. If anyone sees a picture that they would like at much higher resolution, let me know. I’m shooting with an 11 mega pixel camera and have been reducing the images for upload to the website. Once I get to Bermuda, my plan is to take my favorite shots and post them in full resolution.

We have eight people on board, which we have divided into three teams of two. The remaining two people are Rip (our captain) and Phil (our chef). Rip has been helping out whenever and wherever needed, and doing most of what needs done in the engine room. We have rotating shifts on watch, with two people in the pilothouse at all times. At night, the watches are three hours, and during the day, four hours. Roberta and I will soon be commencing our 10:00am – 2:00pm watch, after which, we’ll be followed by

Roberta at the helm