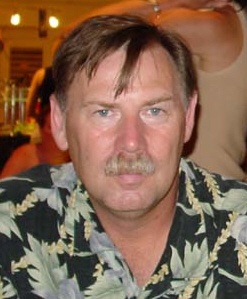 Hello, my name is Ken Williams and this is the first of my daily postings about the NAR Cross Atlantic Rally.

We had a LONG night of packing, preceded by a longer week of packing. Then, yesterday morning,

May 9, 2004, the day had finally arrived. We were on our way! The boat is parked at the Bahia Del Mar Marina in Ft. Lauderdale. It had been in France for the last four years, but was shipped here to Florida for six months of MAJOR overhaul. The electrical system went through a huge transformation including new batteries and invertors. I can now run the entire boat off the invertors, and shouldn’t need the generators more than an hour or two per day. Also, the front cabin, which used to have the invertors and batteries under it, is now useable. Before, the invertors were throwing out so much heat that the cabin was completely useless.

Anyway, enough of that…

The people around us are at least as interesting as the boats. The original premise of the rally was that a large number of powerboats would be crossing the Atlantic Ocean together. Originally I heard that approximately 70 boats would be involved, which was then reduced to 50, then 30, then 22, then 21 – and, now, I think we are down to 18. I’m not sure I know why the shrinking number of participants. My guess is that as the realities, and expenses, of crossing an ocean became a reality for people, their willingness to participate dwindled. I know there were several boats that planned on participating where the owners, or crew, had medical problems preventing them from doing so.

The participating boats range from 40’ to 90’. Most are around 46 feet. There are three 62’ boats, including our own Sans Souci, and only one 90’. Nordhavn has manufactured all but 3 of the boats – the others are built or designed by Seaton, Krogen, and Monk-McQueen.

With respect to boating experience: I’m not sure yet about the other boaters. If our table at dinner last night is any indication, there is a LOT of boating experience here. Roberta and I were feeling like total wimps. We have spent a lifetime on boats, but in small bursts. Other than one three-day trip that I had participated on when Sans Souci was first delivered, we’ve never done a run of more than 10 hours. Roberta and I have taken Sans Souci to virtually every port and island in the Puget Sound and the South of France – with JUST the two of us. But, these are always day trips, done when the weather looks calm. I describe myself as a person who likes boating for the anchoring, not the boating. I like being anchored in some bay, just off a remote island, tendering ashore from time to time, having dinner (and, perhaps some wine) on the back deck, swimming, playing with my computer, etc. That’s my idea of boating.

Now, let’s contrast Roberta’s and my boating experience with those at the table. First, the Stricklands. A reasonably young couple, mid-40’s I’d guess. He’s a software developer. They picked up their boat just six months ago (a 47 foot Nordhavn), and immediately took it from San Diego to Vancouver, alone. They talked about being anchored off Sucia, an island near Seattle, watching it snow. From there, they headed south, through the Panama Canal, and here to Florida. Once again, frequently with just the two of them aboard ship, although sometimes with one extra crewmember. Scott Strickland spoke about the “fun” of watching thick smoke pour from his engine room 200 miles at sea running off of Nicaragua. As it turned out, it was “only” an alternator belt that had fried, so he was able to continue without it. Then we met another couple that lives in Switzerland (he is English and she is Brazilian), who also brought their boat around to Florida from San Diego. They talked about making one four-day passage with just the two of them. This sounds dangerous to me. We chatted about how much better it is to run your own boat than to have crew. Rip, our captain for this voyage, was sitting there, and didn’t seem too happy with the discussion. And, lastly we met the owner of one of the other 62’s on the trip, Bill Smith. He has taken his Nordhavn 33,000 miles, completely around the world, over the past three years.

I have to cut this short, as I need to get ready for class. Today, I will be learning about fuel systems, and spending an hour filling out paperwork. Tonight we have planned to take the tender and go exploring. Allegedly there are some great restaurants we can boat up to from here.