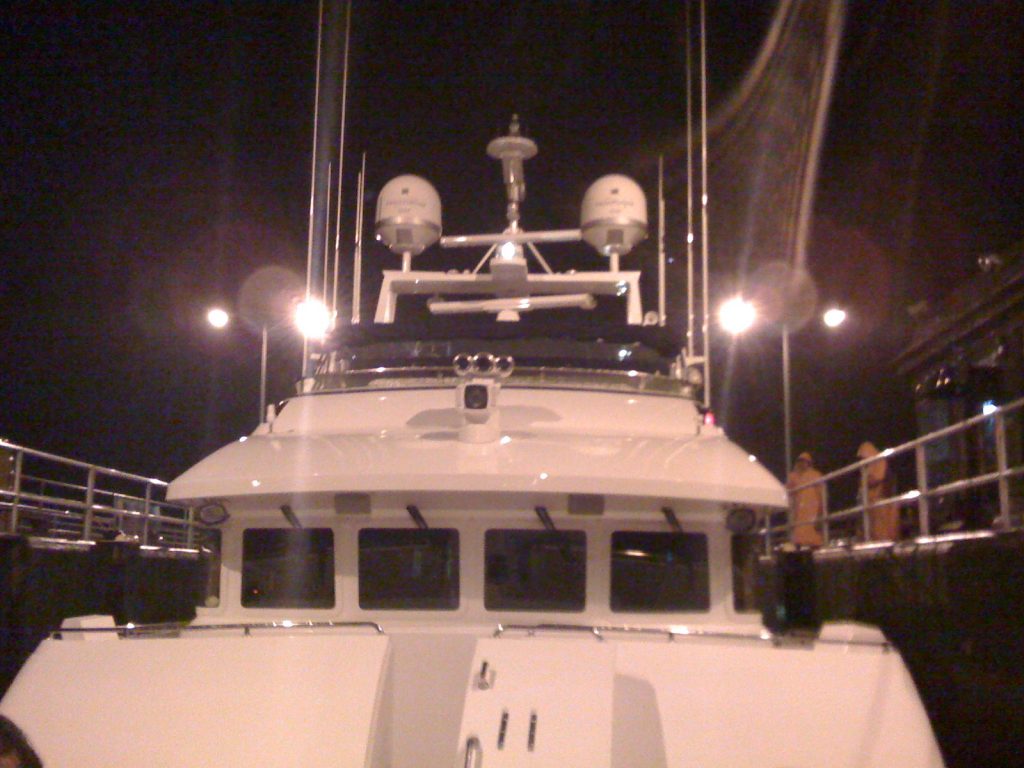 The Last Leg to Seattle

Yesterday morning, I was up early to catch a little prop plane out to Port Angeles (across the Strait from Victoria Canada).

The weather was windy, rainy, cold, overcast; as is standard for Seattle this time of year. The condition was bad enough that I had doubts we would be able to fly. I asked the pilot how it looked, and he said “It’s not going to be a fun ride. In order to fly VFR (visual flight rules) legally, he’d have to stay under the low clouds. And, he was right! We made most of the trip at 200 to 400 feet off the water.

When you can see whitecaps from the air, you know they will look bigger from on the water.

The restroom at Port Angeles airport is interesting. The signs above these toilets say “First Officer” and “Capitain”.

I was greeted at the boat by Jeff. Below is my first view of Sans Souci since leaving her in Golfito in April. I had been worried that the boat would be a total mess. But, she looked as great as ever!

Jeff asked if I wanted to run the boat out of the marina, and I quickly agreed. I was worried I wouldn’t remember what to do, but it was like riding a bike. The boat performed flawlessly, and within minutes we were underway.

I didn’t get a picture, but almost immediately after leaving the dock at Port Angeles we were dodging a giant freighter that was coming in. As it approached, a pilot boat shot out of the harbor, passed us, and maneuvered to come along side the freighter. I had never had an “up close” view of how the process worked. When entering harbors, rather than risking a freighter captain who is unfamiliar with the port banging into things, the freighters are required to board a captain who is familiar with the local waters. The pilot boat positioned itself alongside the freighter, both running at 10 knots. A door opened in the side of the freighter, a few feet off the water, and the pilot stepped from the pilot boat into the freighter. Amazing to watch. On our Atlantic Crossing, in mid-Atlantic, Goleen, an N57, and my N62, came alongside each other, to pass some medical supplies. I remember that it was the scariest experience of the trip as my boat was suddenly caught by his wake and turned unexpectedly 90 degrees to starboard. All was fine, but it was a lesson I wouldn’t want to repeat.

As we were running the Strait of Juan De Fuca, I asked Jeff what the highest wind was that he had seen on the run north. He said they had seen 40 knots several times along the coasts of Oregon and Washington. Perhaps 15 minutes after asking the question, we topped 40 knots! Here is a look at the wind meter on Sans Souci:

In other to stay out of trouble, we “hugged the beach” on the south side, to hide from the wind, and to limit the wind’s ability to whip up waves. We had sustained winds for three hours over 35 knots, and twenty minutes or so in the mid 50 knots! The highest I saw was 57.9 knots true.

To reach Seattle, you have to go through “the locks”. I’ve been through probably dozens of times, but never on this boat. Passing through the locks can be complicated, but the hardest part tends to be getting into them. Commercial boats, and fishing boats, take priority. For example, yesterday, when we arrived at the locks, we were the only boat around. After about 30 minutes, a fishing boat approached. Seattle has a “Big Locks” which is several hundred feet long and takes freighters, and a small locks, which is just over 100 feet long. To minimize the loss of fresh water on the east side of the locks, they only run the large locks when needed. Because the fishing boat was about 50 feet, we couldn’t fit together in the small locks. We had to move over and send it through first. An hour later, we were ready again, when a small 30 footish fishing boat appeared. Great news! We’d both fit. I have waited entire afternoons at the locks, even after showing up first.

Approaching the locks, we had one other adventure which I should note. There is a “draw bridge” just before the docks. We were sure if we could clear the draw bridge. There is an indicator showing the clearance under the center of the bridge. It said 42’ and my recollection was that we were 46’. This meant calling the bridge. Before we did that, we decided to test to see if we could fit under. There was a 2+ knot current, in the narrow channel, so maneuvering was a little tricky. We decided to pull forward and almost touch the bridge, while the crew stood on the deck to watch the antennas. It was going to be close. As we got close to the bridge, the bridge operator must have seen us, because he raised the bridge. We still have no idea if we would have fit or not. This left us in the awkward position of needing to move forward to the locks, even though we really should have been waiting before the bridge. It worked out.

Within minutes of clearing the locks, we were tying up at Salmon Bay Marine Center.

As we were shutting down the engines, I glanced at the GPS unit. Jeff zeroed the trip meter when leaving Costa Rica. He had run 4,018 nautical miles in the last five weeks! The bottom GPS also has a distance on it, and I don’t remember when that GPS was zeroed. There’s a chance it goes clear back to when we took delivery: 9,870 nautical miles! Not too shabby for a boat one year old!

As I’ve said before, Congratulations Jeff on a great trip! And, thank you Nordhavn for building a great boat!

And, on a completely different subject, and I’m bouncing backward in time to the evening just before I boarded the boat.

As Jeff was still off the Pacific coast of Washington, approaching Cape Flattery, they had a mechanical hiccup. They were in high seas at the time, bouncing around in a 10 foot swell.

My Simon monitoring system has a track ball, next to the steering wheel in the pilot house, which is normally green. It blinks yellow when it senses something that seems unusual somewhere on the boat, and RED when something seems VERY unusual. When it goes red, alarms go off and red lights start blinking in the engine room. It definitely gets your attention. Well, in the final hour, as Jeff was approaching Cape Flattery, Simon went red.

When Simon calls, we bring up the Simon screen on the computer, and it tells us what is wrong. It said the voltage on the starboard engine alternator had risen rapidly. The alternator should put out 28 volts for battery charging, but it had jumped to 38 volts, and was still rising. When the guys got to the engine room, they could smell immediately that something wasn’t right. One of them, Joe, shot the heat gun at the alternator on the port engine; 110 degrees, then at the alternator on the starboard engine; 250 degrees. Ouch.

But, this raises an interesting question. What would have happened without the Simon monitoring system? The needle on the engine voltage indicator did rise, but I’m sure no one would have noticed. Certainly it would have been picked up (the odor) on an engine room check, but what would be the impact of feeding 38 volts to the batteries for an hour or two? This is how electrical fires can start. Simon earned its’ keep!

Looking forward, my first thought is: Can I remove that alternator completely? I’m going to give it serious thought. There are MANY ways to charge the batteries on Sans Souci, so losing one alternator wouldn’t (shouldn’t) be a big deal. And, I’ve never had a device that wasn’t on the boat fail. This particular alternator is in a hard to reach place. By removing it, I wouldn’t have to think about the belt breaking, or the voltage regulator failing. I’ll ask the experts…

PS I just received the logo for Siberian Rally next summer (it’s not really a rally, but with four boats, it feels like one – all the same logistical issues). Every good rally needs a logo. This one isn’t approved, but it’s my suggestion:

PSPS … there’s a Dan Streech (Nordhavn’s President) posting that popped up in comments… beneath my blog posting from three days ago… Lots of great comments lately!

Post Views: 328
PrevPrevious PostI’ll be on the boat for the final stretch
Next PostThe blog is On Vacation until Nov 17Next