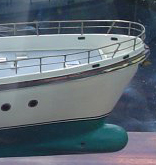 Each time we have spoken, Bill has shared interesting stories about boating in the Aleutians. One funny thing about our conversations is that I’ve started cutting him off whenever he gets too interesting. I’m trying to put together a conference call with Bill, and all of the captains and crews of the GSSR participants, so that everyone gets a chance to ask their questions at the same time. We actually had a call scheduled for tomorrow, but then the weather improved and Bill had to head back to sea fishing. It is incomprehensible to me that anyone could go out in the weather that Alaskans regularly fish in. Here’s Bill’s email to me:

“…Blowing gusts to 70 at the moment. It shows signs of giving up a bit so I can ride the back of it out fishing tonight. Miss Lori will go in any kind of fair wind. 50 knots on the stern is a go. Have been in worse but not on purpose. Been in this boat since 1984 so we have seen about all there is to see and still keep the red side down….”

During our call yesterday Bill asked why my boat didn’t have a bulbous bow. He mentioned that the Alaskan fisherman were having great results with increasing fuel efficiency, and speed, through the addition of a bulb. He even made the comment “Everyone who can afford a bulb is adding a bulb.”

My prior boat, an N62, had a bulbous bow and I always thought it was cool. When we were ordering our N68 I asked why Nordhavn had stopped adding the bulbs, and this was their response:

1. The pounding caused by the bulb in certain sea conditions is unacceptable.

2. The fuel savings of 10% shown in the test tank is really not that good in real life conditions of pounding and random movements.

3. The pitch reduction shown by the bulb in the test tank is not as applicable to our modern designs. The N62 is a round stern boat. One of the components of pitch is the sinking of the stern. The new boats have broad sterns with lots of buoyancy which dampen pitch.

Given Bills comments I did think briefly about whether or not I should consider adding a bulb. I didn’t think long before deciding that it was not something I would do. I certainly wouldn’t mind having extra range, and lowered fuel costs. On the other hand, adding a bulb is expensive, and I’d need to save a LOT of fuel to get my money back. The bulb should ultimately pay for itself, but it would take a while.

More importantly, it is impossible to know for certain what impact a bulb would have on the ride. I’m as big a fan of the N62 as exists, but you can’t compare the ride of our former N62 to the ride of our N68. The N68 wins by a mile. It may just be the difference in weight, but whatever it is, the N68 is as smooth a boat has I’ve ever been on, when heading into heavy seas. It’s not very scientific, but here’s my basis for comparison: On our N62, the bow of the boat was uninhabitable when in any kind of head seas. We had a stateroom in the bow, and whoever had the misfortune of having that stateroom would quickly move to the couch or floor in the main salon. Being in the bow was like being inside the world’s fastest elevator, as it constantly traveled between floors, not always predictably. On the N68, we have the master stateroom in the bow. I’ve slept comfortably traveling in heavy head seas on several occasions. If someone could absolutely guarantee me that I’d save 10% on fuel, extend range by 10%, and not mess with success (the smoothest ride one could hope for), I’d consider adding a bulb, but not until. I’ll let some future N68 owner do the research for me.

On a different topic, Bill sent me some more pictures of himself, and his crew, exploring WWII artifacts in the Aleutians. In one of the pictures, you can see unexploded munitions left over from the war, and in another Japanese tunnels that they explored. You can also see more of the mini Japanese sub.

And, while I’m on this topic: Make sure you check out the comments at the bottom of the January 11 blog entry. John Kennelly has the N62, Walkabout, and is circumnavigating with his wife and three kids. John is really the father of our expedition, in that he ran the GSSR, the same direction as us, a couple of years ago. Somehow, Braun Jones of Grey Pearl, met John, who excited Braun about the trip. Braun then forwarded an email from John to Roberta and I, and the GSSR was born.

Lastly, Roberta has been hard at work on trip planning. She uses Google earth, and has been marking anchorages, and interesting places to stop along the route. Her “placemark file” for google earth can be downloaded by clicking here. If you view the “properties” on each placemark you can see her informal comments to me on each location.

Post Views: 321
PrevPrevious PostSans Souci Gets Hauled Out
Next PostTrip Preperation, and the Meaning of LifeNext