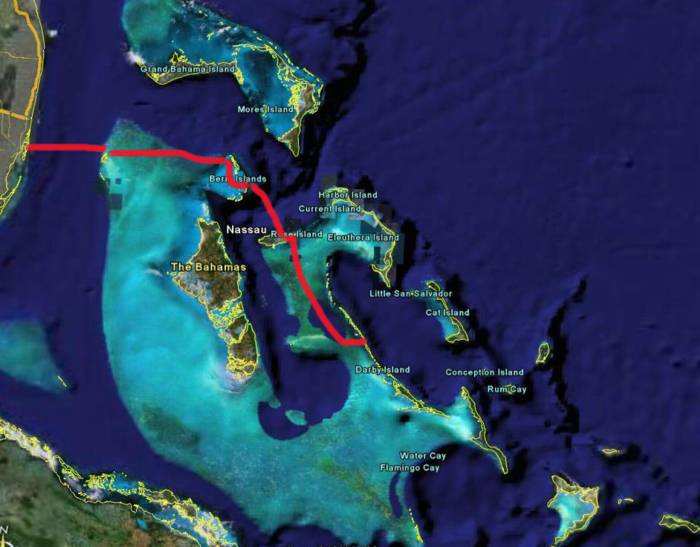 This is part II of a trip report on cruising the Bahamas, by Ken Williams. For part 1, CLICK HERE.

As long-term residents of Seattle, one would think that we are accustomed to rain. This is only partially true. Generally in Seattle we get drizzle, whereas here in the Bahamas we are getting something which feels more like standing in front of a fire hose. Not only is it a drenching rain, but because of the 30+ knots of wind, it is coming sideways. The bimini top covering the back of our boat is meaningless against the storm.

Our three days in Nassau can mostly be summarized as: waiting for the rain to stop. The only “excitement” came when another similarly sized power catamaran arrived. We watched from inside our boat as the cat attempted to back into the slip next to ours, waiting for it to slam into us, or worse. I couldn’t imagine why it was out in this weather, but there it was a few feet to our starboard, attempting to slide into the slot next to us. Unlike our boat, this cat had no interior drive station. There were two men aboard, one at the wheel, and the other standing on the bow, attempting to throw a line to the dock. Both were soaked to the skin, and not looking very happy.

There were a lot of reasons for hoping they would soon succeed in their docking attempt:

1) The wind was pushing them hard at us, and I wasn’t in the mood to hear scraping fiberglass
2) These guys looked miserable
3) Where were the dock hands? I suspect these guys called for help, and the dock hands were ignoring the call. As the nearest boat, it was me who was going to have to venture out, if the situation didn’t solve soon.

After watching several failed attempts, there was no option, I had to help. Catching a line took only a minute or two, but in so doing I had become drenched to the skin. Roberta refused to allow me into the boat until I had dried off. She handed me a towel, and then wouldn’t let me into the boat until all clothes were removed. Luckily visibility was severely limited. Entering the boat, wearing my towel, Roberta and I starting talking about how boating isn’t for everyone. You need a good sense of humor, and an ability to “go with the flow.” We had planned dinner at a nice restaurant in Nassau, but now it was obvious we weren’t leaving the boat. People who easily get irritated, when things don’t go as planned, may not make great boaters.

Later, the two gentlemen on the arriving boat thanked me profusely and explained that they had been surprised by the rain, 40 miles offshore. Their return trip took over six hours, averaging just over six knots. I’m surprised they made it.

Finally, on Thursday, we were able to leave Nassau for the Exumas. The Exumas are a long span of hundreds of small islands, within the Bahamas, stretching roughly north to south. We had rented a cottage, for a week, on Staniel Cay. Our thought was that this would put us roughly in the center of the Exumas, and we could spend each day exploring with our cottage as the hub.

The run from Nassau to Staniel Cay is approximately 80 miles, all across the “Great Bahama Bank”. For most of the run we had only six to eight feet of water under us, which in the Bahamas is considered “deep water.” There were occasional patches of coral, but we were easily able to steer around them.

We were advised to wait until Friday, for calmer seas, but were stir-crazy and wanted to get moving. The seas were not bad. Throughout the run we had two to four foot waves, but the annoying part was that it was a non-stop beam sea. We were being pushed from the starboard side, and couldn’t seem to find a comfortable speed. Normally, you can adjust course slightly to smooth the ride, but with an 80 mile ride in shallow water, I didn’t want to veer off course. By sticking to the route marked on the chart, I felt we had the greatest chance of avoiding “surprises.”

About every 60 seconds we would tilt way right, then a few seconds later tilt way left. About every 10th cycle, we’d surf the top of a wave, and crash into a valley, jarring teeth and emptying cabinets. I tried adjusting our speed, trying to find the maximum “survivable” speed. Nothing helped, so we toughed it out at 25 knots, and four hours later, we were at our new home.

“Serenity” The yellow cottage on the right,
Ours for a week

The owner of our cottage, who lives in the blue cottage is Martha Wohlford,
an America author who has been coming to the Bahamas for 37 years,
and now lives here. She accompanied us on the boat site-seeing,
and knew everyone we met, on every island.

Arrival at the dock in front of our new (rented) cottage was not quite the pleasure I expected. Before I talk about our arrival, I need to segue way and talk about tides and mooring here in the Bahamas. Tides in the Bahamas, at least now in May, swing about 3 ½ feet. We have similar tides in Seattle, but generally, they aren’t too troublesome. Most pacific northwest moorage (or, at least the moorage I use) floats up and down with the tide. The local custom here in the Bahamas is to orient the docks to high tide, and allow the boat, rather than the dock, to rise and fall with the tide.

On a taller boat, this wouldn’t be a big deal, but for us on the Glacier Bay, it is presenting a challenge. This means tying to a dock which is easily four feet above us (if arriving at low tide). It also means that at high tide you can’t tighten the lines snug, because you don’t want your boat suspended in air as the tide drops. Lastly, the fenders I have on board are of the “dangling” type. They are useless in this scenario, where the dock rises and lowers dramatically against the side of the boat. What I should have is long cylindrical fenders which I can hang sideways, to protect the side of the boat.

Further complicating our approach was a strong current, running parallel to the dock. Remembering my days of flight instruction, I put my nose into the current, and moseyed my way to the dock. Roberta then stood on the side of the boat, and attached a bow line. Once that was accomplished it was just a matter of working out the correct line length. I solved the fender issue by tying my fenders end-to-end.

The view from our cottage Not too shabby!

Neither Roberta nor I slept well our first night at “Serenity”. Somewhere along the way we were attacked by “No Seeums.” Each of our legs had 100s of itchy little bites. Roberta refused to let me show a picture of her legs, and I originally had a picture of one of my legs here, but after thinking it over, I decided that it wasn’t in good taste. You are lucky. We weren’t quite as lucky though, in that Serenity’s owner is having some work done on her home. Each morning has meant jack hammering, starting at 8am. Ouch.

You may be wondering why we rented a cottage. Those who have read my previous trip reports have heard me say on many occasions that we like boating primarily for the anchoring. Yet, on this particular trip, we booked ourselves into hotels for 25 of 30 nights. The reason: this is our first trip to the Bahamas. We don’t know where the good anchorages are, and we don’t yet know how the anchor on our Glacier Bay does in high winds. Also: we have been spoiled by our larger Nordhavn. The Glacier Bay’s lacks a shower, and an internet connection. Lastly, there are sharks EVERYWHERE you look. I’ve been told that these are nice sharks, and not to worry – but, I’m in no hurry to go swimming (swimming is normally something I enjoy as part of the anchoring experience.) All that said, after a week spent sleeping in port, and rented rooms, I am aching to get to anchor. Expect that the next time I write I’ll have some great stories to tell of good-times spent on a hook.

PS Exploring around the Exumas is amazing! I’ll close this update with a few pictures from the area. Enjoy!

Looking from our rented cottage towards the Staniel Bay Yacht Club

I don’t mind clouds, or even rain, but I definately do not like lightning.
Fortunately, that has not been a major factor yet

The anchorage at “Major Cay”. An extra bonus here is that the pigs on the
island have been trained to swim out to the boats to get food.
There were no pigs today, so we’ll keep checking back.

Finding an empty beach, that you can have all to yourself is easy here.
They exist in every direction
I was impressed that all of the docks in the Bahamas are so nice and new.
After thinking about it, I realized that they are probably new because of last year’s hurricanes.
Here we are at Compass Cay (pronounced “Key”).
Marty (who we rented the cottage from) guided us here,
a trip of about 8 miles. Even with local knowledge,
we bounced off a rock and had to crawl our way across
a sand bar about the size of a football field,
covered with “just enough” water to get through. Very tense.

Compass Cay prides itself on having “pet sharks”.
Does life get much better than this?

Shelby is very happy that Roberta is carrying her
Post Views: 300
PrevPrevious PostBahamas Cruising (just getting started)***
Next Postjared/charismaNext