Almost Home. But, The Weather is Not Cooperating 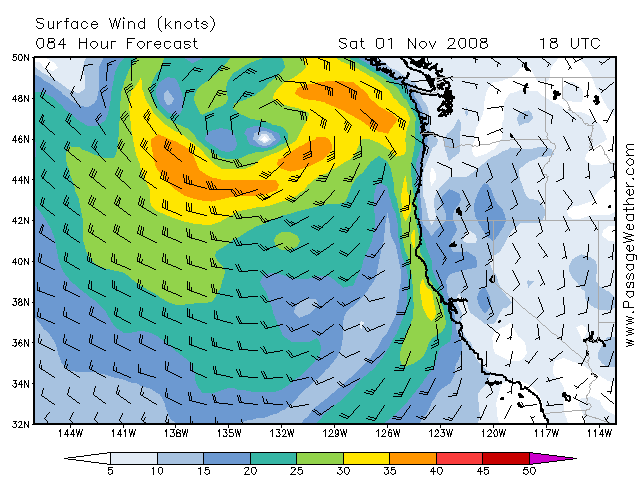 Sans Souci will cross the California border with Oregon within the next few hours. When I spoke with Jeff aboard the boat, he said that he feels like he must have angered someone, because he keeps seeing reports of calm seas ahead and behind him — but, 25-30 knots of wind out the window. It’s like there’s a big storm which has just decided to follow him up the coast. He had an uncomfortable evening, but believes this should be a calm day.

Unfortunately, things are going to get worse soon. A major storm is moving in, and he must turn the corner at Cape Flattery (the entrance to the Strait of Juan De Fuca) by Friday night or things will get ugly.

The boat is now a little over 400nm south of Cape Flattery, so this should not be a problem. We generally move 210nm a day, so he should easily turn the corner on Friday morning. He’ll have a bumpy ride Friday, but should be ahead of the storm.

As a little idea of how ugly it can get, I just rediscovered these pictures, that I posted on the blog last year, of a Coast Guard boat doing exercises around Morro Bay: http://www.kensblog.com/aspx/m/416167

And, on a different topic:

I noticed this posting by Scott Bulger, a Nordhavn 40 owner on the Passagemaking Under Power list, talking about “get home” or “wing” engines. I thought it raised a lot of good issues, so I’m reposting it here…

“… Ok, finally I can compose my thoughts on a get home engine. First, I should say I don’t have a get home engine, I have a get someplace engine. The thought you could maintain any kind of steerage or make any real distance on the wing engine is really fantasy. However, that said, I’ve used it once and was glad I had it. We threw a belt early in our trip and I started the wing so Marian could man the helm and keep us running downswell while I cut the remains of the belt out of the main engine. Of course since the main was shut down I lost the stabilizers so it was far from pleasant. I also know a 43 skipper that lost his tranny and used the wing to get back to a marina. In his situation he could have called a tow, but as others can affirm, the currents in Puget Sound run pretty quick and you can find yourself aground in no time!

I’ve heard there have been several Nordhavns that have had their wing engines rust from the inside out because they aren’t used. The owners are advised they have to run the engines at least a few hours a month in order to keep the parts lubricated and systems functional. I try to do this and have about 30 hours on the wing, so I guess I’m keeping up with the minimum.

Anyway, there are a few issues with wing engines. First and foremost is how they fit into the overall scheme of things. If you’ve chosen a single engine boat then a wing seems attractive. However when you consider that something like 90% of all engine problems are fuel related, unless you maintain a dedicated supply of wing engine fuel, you’re likely to only get a few hours runtime out of it before you have to use the same fuel that killed your main. Maybe by that time you’re ready with an inexhaustible supply of filters? Regardless I think you really have to consider what your trying to achieve. It seems to me you need to make a table of features and benefits, addressing some additional questions like:

1. Do I NEED a second prop and shaft so I can run the wing if I

a. Well, if you wrapped a bunch of line or a net around your main,

isn’t it likely it’s flopping around back there ready to snare the wing as well?

2. Am I willing to keep it running? Will it be there when I need it?

a. Not really hard to do, just being aware of it is half the battle.

Chances are it will work when you need it

3. Can I really operate the boat with it?

a. Will it overcome moderate winds and seas?

b. Is the asymmetry in the thrust going to require me to use 20 or 30

c. If my stabilizers are dead can the boat really even move or are you

better off throwing out a sea anchor and flopper stopper and trying to hail a catamaran to tow you to shore? I figure those cats are magic and do anything anyway, so you might as well experience the total humiliation of being towed in by a cat.

If you made a table that included the likely failure scenarios and then mapped the proposed solutions against the expected failure, I’m certain one solution would rise above the others. I’m really surprised no one has suggested fabricating a bracket for the stern of the boat and then using a small sail drive or diesel outboard to move the boat? I guess a diesel outboard would weight like a thousand pounds, so that probably doesn’t make any sense.

If I was going through the design exercise I’d look really hard at having a combination Genset/Wing Engine/Watermaker system. It seems crazy to me that I burn diesel to make electricity to run a pump to turn salt water into fresh? With all that power in the engine room doesn’t a watermaker pump running off the wing/gen/main make a lot of sense? Properly engineered couldn’t this system be adaptable to drive a huge bilge pump in the case of flooding and a wing shaft or turn the main wheel? Who cares if it doesn’t have reverse. If you have this kind of failure and you bring the boat back to a marina all you have to do is get it close to the dock and your going to be thrilled. This is one reason why I’ve never spent much time showing Marian how to dock the boat. If I’m incapacitated she can get the boat close enough to land that someone can come aboard and land the boat if necessary. What she can do is figure out where we are, get on the radio and then use the boat chartplotter to get us where ever we need to be. More than that would be wonderful, but not absolutely necessary. I guess what it all comes down to is PAE/Nordhavn has been building hundreds of Passagemaking boats and I bet the VAST majority of them have wing engines.

They must have looked at the economics of designing their own family of systems to replace all the add on components but they still continue to use the individual components. Perhaps this is because every buyer brings his or her own requirements to the buying cycle and if they had to educate the buying public on a custom designed system it would drive them crazy? So in summary, for those people that are buying production boats that have wing engines designed into them it’s pretty much a $30,000 go/no go question. If your skilled enough to be designing and building your own boat I have to believe there are some economies and advantages in looking at propulsion, electrical power generation, water making and other needs from a systems approach, then designing and building a system to meet these needs.

As for you John, if you really needed to you can tie the tender up to the side of the boat and kick the motor in gear and probably get 50 or 100 miles? Maybe that’s enough for a near coastal boat? I remember seeing the panga drivers in Puntarenas towing boats in the river with small outboard motors. It was amazing how easily they pulled them through the water. In the middle of an ocean if you lose the main I don’t know what you’d do?

PS Here’s the latest idea for a name for our “Mini Rally”: The Great Siberian Sushi Run